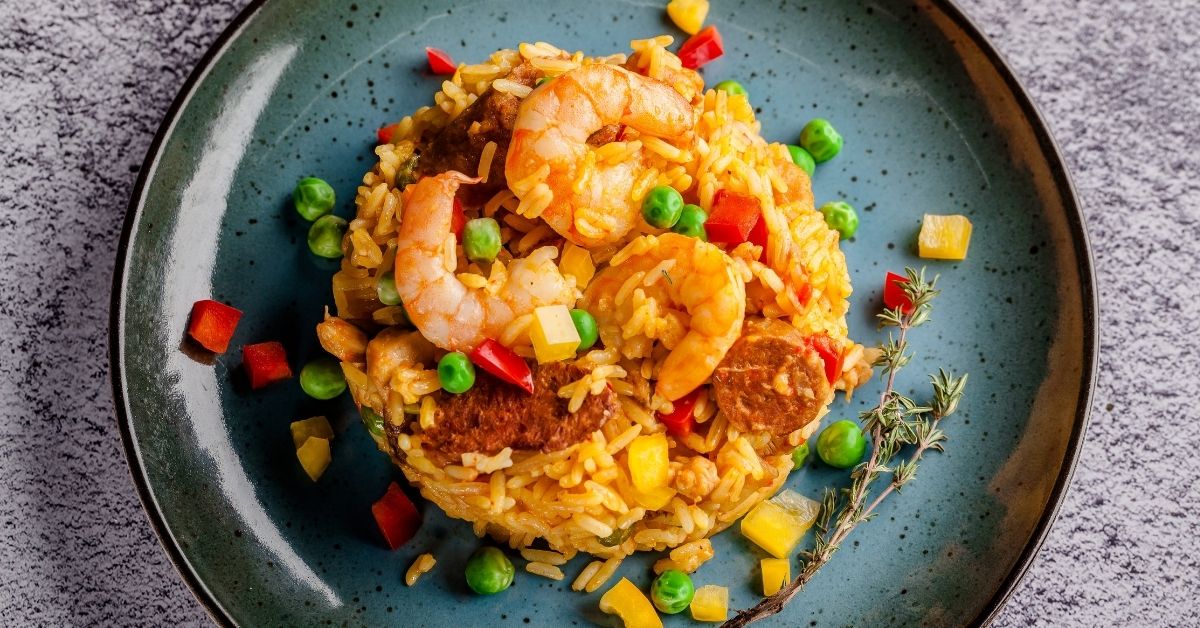 Like all Portuguese food, Portuguese side dishes are warm, filling, and often a bit spicy.
They incorporate a nice, proportional mix of ingredients for a balanced, healthy meal.
Want to save this recipe? Enter your email below and we’ll send the recipe straight to your inbox!

Portuguese chefs cook with lots of rice, corn, potatoes, and other carb-filled foods and ingredients.
It’s hard to be low-carb, surrounded by so much delicious Portuguese cuisine.

Despite the carbohydrates, Portuguese food is not all that unhealthy.
As I mentioned, they use several veggies and stay away from many of the fatty, high-cholesterol foods.
You won’t find a ton of red meat, particularly in these side dishes, at least.
Also, the food doesn’t have the same heavy reliance on salt and sugar that American food often does.
If you’re looking for a unique bread or a tasty, well-seasoned way to cook potatoes, this list has you covered.
I’ve tossed in a few of my other Portuguese favorites, as well.

Portuguese tomato rice, or arroz de tomate, is precisely what it sounds like – rice flavored and cooked with tomatoes.
There are a few other ingredients in the mix – onions, garlic, bacon fat, broth, oil, and seasonings – but tomatoes and rice are the stars of the show.
It’s a delicious, tomato-y dish, and although plenty of people add meat to it, it tastes great just as it is.
If you’ve ever had what my grandmother called “macaroni and tomato juice” – a soup consisting of freshly canned tomato juice, bacon grease, and elbow macaroni – then you already have an idea of how this tastes.
Want to save this recipe? Enter your email below and we’ll send the recipe straight to your inbox!

If you haven’t had that particular soup, it’s harder to describe the flavor, but if I had to sum it up in one word, I’d call it scrumptious.

The total time on this Portuguese salad recipe is 45 minutes.
However, 30 minutes of that is just letting all the ingredients chill in the fridge, so it’s not all that difficult to make.
If you can chop and mix ingredients, you can whip this up with no problem.
It’s a cold, refreshing salad with plenty of crisp, fresh veggies, and it tastes best in the summer when everything comes from the garden.
All you’ll need are tomatoes, red pepper, onions, cucumbers, olives, olive oil, red wine vinegar, salt, pepper, coriander, and mint.

This tuna salad is thick and chunky, and it’s meant to be eaten by itself like a salad, not like the tuna salad we often use as a sandwich spread.
You’ll have to cook the potatoes and boil the eggs, but it’s simply a matter of mixing up ingredients for everything else.
Between the chickpeas, tuna, and olives, you’ll get a heavy dose of earthy, umami flavor, and the eggs, potatoes, and onions give the dish a heartiness that’ll keep you full for hours.
Finally, the olive oil, red wine vinegar, and parsley add lightness and freshness that really set off the whole dish. It’s a great combination of ingredients.

Portuguese cornbread looks unlike any American cornbread you’ve ever eaten. It’s a large, round loaf with intricate cracking all over the top.
The inside is dense and tightly packed, and the whole thing has a subtly sweet taste that pairs nicely with almost anything.
The loaf is also a little crispier on the outside than the cornbread we’re used to eating.

No one does roasted potatoes like the Portuguese do roasted potatoes.
If you like yours exceptionally crispy, a little spicy, and with a lot of flavor, you’ll love these.
Most of the time, I leave the sausage out of this recipe. I enjoy just the potatoes and all the seasonings.
If you leave the sausage in, though, this side dish becomes the very definition of “meat and potatoes.”
The 90-minute cook time may seem excessive, but trust me, you’ll want to stick to it.
That’s what makes the potatoes so crispy and full of flavor. No other roasted potatoes can compare.

I love garlic bread just about any way you can cook it, and while this recipe for garlic bread isn’t my all-time favorite, it certainly makes it into the top five.
The thing that makes this recipe so unique is that the garlic is inside the bread, not on top of it.
Unlike most other garlic bread recipes, which instruct you to cover the bread in butter and garlic powder or an herb-garlic butter mixture, for this one, you’ll literally bake garlic into the dough itself.
That means it isn’t greasy or messy and that every single bite is infused with garlic.
Of course, if you want, you can always add additional powder to the top of the bread, too.
Actually, now that I think about it, this one may have to move into the top three.

It should probably come as no surprise that Portuguese chefs are just as good at frying potatoes as they are at roasting them.
Each potato is thinly sliced, smothered in butter and olive oil, and seasoned with salt, pepper, and rosemary.
They have a relatively mild flavor compared to many Portuguese foods, but they’re still unbelievably yummy.

Milho fritos look and even taste like oversized croutons, but their consistency and texture are slightly different.
You make croutons from fried bread; milho frito, on the other hand, is made from fried cornmeal/polenta.
They’re both tasty and herby, but milho frito is less crunchy and retains a bit of its corn flavor.

While this soup does have some sausage in it, it mainly contains healthy foods like kale, onions, potatoes, and garlic.
It takes about 45 minutes to make, and it’s a hearty, flavorful soup that’s ideal for the colder months of the year.

This gorgeous green soup is another dish that probably looks unlike anything you’ve ever seen, and that’s not just because it’s green.
Each bowl also contains a large chunk of bread and a poached egg.
Other than that, the ingredients are fairly simple – garlic, olive oil, cilantro, water, salt, and pepper.
Despite the limited ingredients, the soup has a lot of flavor, and thanks to the egg and bread, it fills you up, as well.