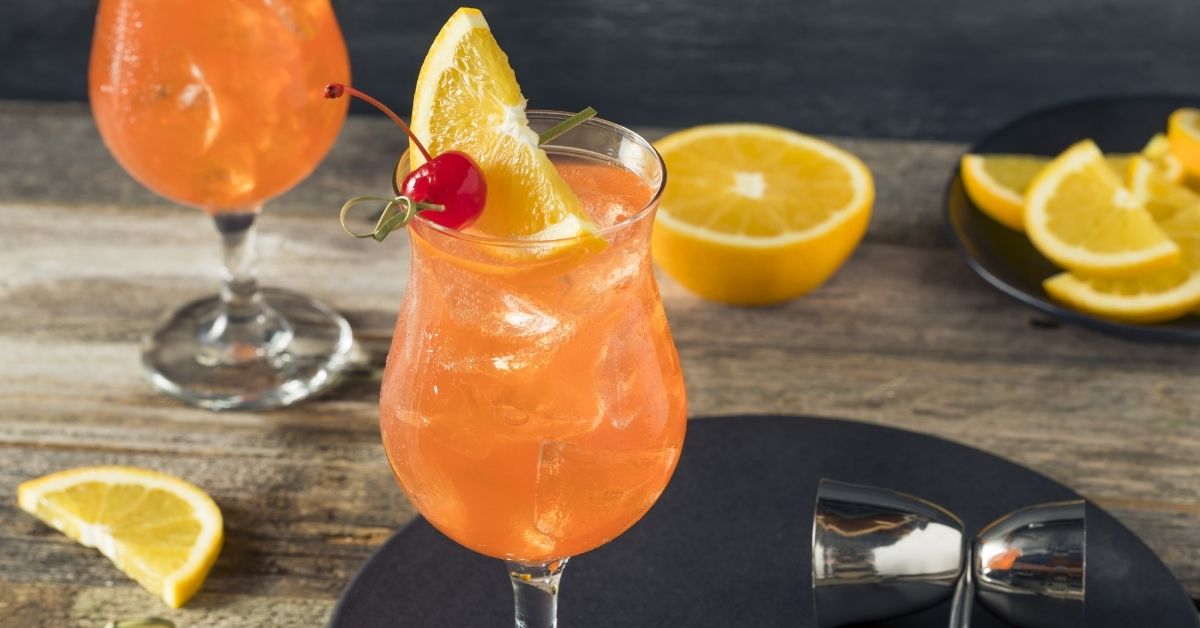 The popular Asian cocktails are so tasty!
When people think of Asian liquor, their minds usually go straight to sake, with some of the serious alcohol connoisseurs thinking of Japanese whiskey, as well.
Want to save this recipe? Enter your email below and we’ll send the recipe straight to your inbox!

But there are plenty of great Asian cocktails out there that have nothing to do with either of those ingredients.
For instance, Asia has vodka- and gin-based cocktails, just like America does.

Asian cocktails use a lot of ginger and spice, and traditionally speaking, they aren’t all that sweet.
Then again, Asia’s culture isn’t known for its sweet and sugary dishes, either.
So if you’re looking for Asian cocktails that are spicy, rich, and full of flavor, this list of 10 should have you covered.

Although this 5-minute cocktail isn’t sweet, it’s one of the sweeter options on the list, especially if you make it with pear vodka instead of regular vodka.
You’ll also need ice, ginger beer, club soda, and several slices of Asian pears for a garnish. It puts an Asian twist on the traditional Moscow mule recipe.
The ginger beer adds some spice and depth to the overall flavor, and it keeps the drink from being overly sweet.
The club soda makes it bubbly and fun to drink.

If you’re looking for a heavily booze-flavored drink that’s easy to make, it’s hard to beat the whiskey mac.
It uses only two ingredients – blended scotch and green ginger wine.
You can make it with a heavier scotch to ginger ratio if you prefer to taste your alcohol while you’re drinking it.
Want to save this recipe? Enter your email below and we’ll send the recipe straight to your inbox!

If you’d rather taste the invigorating spiciness of ginger, add them in equal parts.
It’s an easy-to-make drink that’s not too strong but strong enough to feel it after just one glass, especially if your tolerance is low.

This transparent, bubbly drink looks like a glass of Sprite or club soda sitting on the table, so keep it out of reach of tiny hands that might be craving a glass of sugared carbonation.
It’s as simple to make as the whiskey mac and requires just as few ingredients: Japanese whiskey and club soda.
It takes no more than 5 minutes to whip up one or two of them.
If you’re not a fan of Japanese whiskey, this drink probably won’t be for you because it’s basically watered-down whiskey with some pretty bubbles.
However, if Japanese whiskey is your thing, then you’ll probably love it.

When you first check out the ingredients list for this drink, it may look a bit long, and as far as cocktails go.
However, the multiple ingredients are what makes it so good.
The primary flavor is fruit – pineapple, cherry, lime, and orange – but there are other, earthier tastes in the drink – primarily herbs.
If you make it correctly, it’s not a sweet drink, despite all the fruit.
It’s more complex and hard to describe than that. It is, however, really, really good.

This dry, slightly flowery drink is popular in Japan, but because you’ll serve it inside a watermelon, it makes an excellent summertime drink in America, as well.
It’s light, dry, slightly flowery, and has a ton of watermelon yumminess.
It’s also slushy and cold, making it the perfect way to cool down on a long, hot day.

The Tokyo Mary is simply a Bloody Mary with a Japanese and wasabi twist.
You’ll use many of the same ingredients – tomato juice, lime juice, vodka, celery, etc.
However, you’ll also add soy sauce, wasabi, and the liquid from a jar of sushi ginger.
This is one spicy drink, and if it doesn’t give you Asian cocktail vibes, absolutely nothing will.
It tastes best when served cold, and it packs a wallop of umami flavor that makes it a totally different drink from the traditional Bloody Mary.
Still, if you like Bloody Marys and don’t mind a bit of extra heat, you’ll probably enjoy this drink.

This quick and easy 5-minute cocktail is another option for those of us who love ginger, herbs, and just a hint of citrus.
Its overall taste is rich and complex, but it’s hard to pin down other than to say it’s gingery and boozy.
There’s not a popular American drink to which I can compare it, but if you like strong drinks with a somewhat bitter tang, give this one a try.

If you’ve never had yuzu, it’s like lemon but a bit more herb-flavored.
It’s definitely as sour as a lemon, but there’s a delightful earthiness to it, as well.
The yuzu cocktail can be described in somewhat the same fashion.
You’ll make it with yuzu, gin, vanilla extract, simple syrup, orange bitters, and club soda.
It’s a very tart drink, but it isn’t so sour that you can’t enjoy it.
It’s also bubbly, light, and has a lovely transparent white color that’s made even more beautiful by adding ice.
If you’re a fan of tart lemonade or other sour drinks, you’ll enjoy this one, as well.

Despite all the citrus, it’s not a sweet drink. It’s zestier than anything.
But it looks nice, isn’t too strong, and is perfect for serving either before or after dinner.

The Tokyo mule is another variation of the traditional Moscow mule recipe, and believe it or not; it’s the only one on our list that actually uses sake!
You’ll make it with vodka, unfiltered sake, spicy ginger syrup, sparkling water, the juice of a cucumber, and lime juice.
It’s kind of like cucumber water, the Moscow mule, and a mojito got together and decided to mix things up a little bit. It’s a light, refreshing drink that’s really hard not to like.
Thanks to the spicy ginger syrup, though, it does have a bit of a bite to it, so be aware of that before sitting down to drink it.