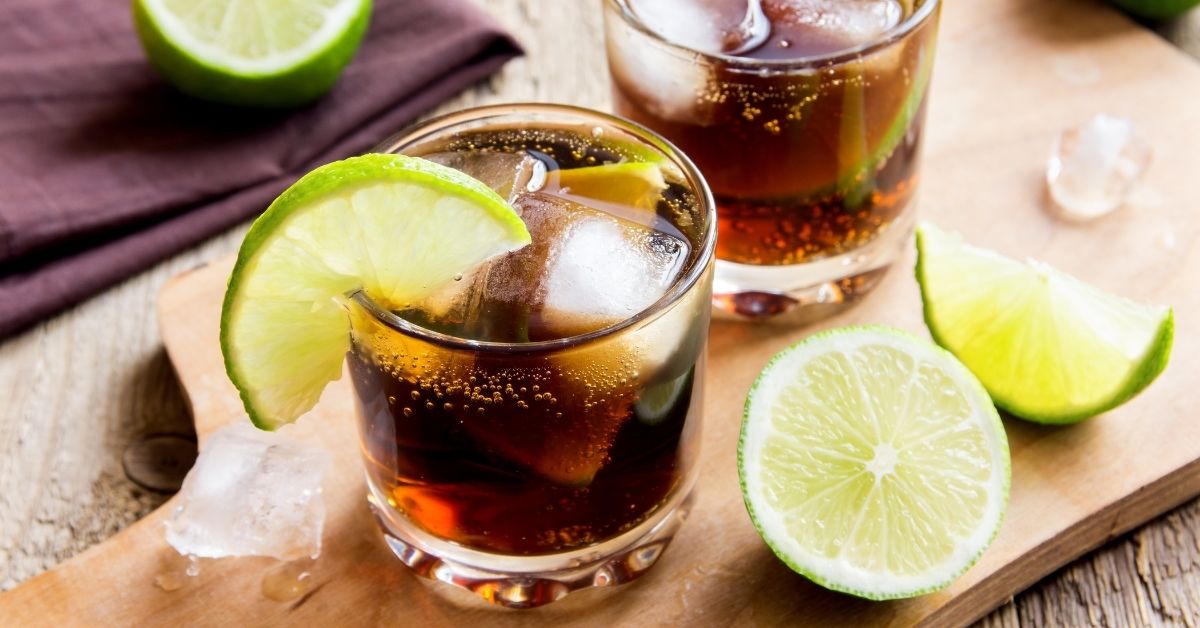 Before I dive into talking about Licor 43 cocktails, let’s first talk a little about the drink itself. Licor 43 is a popular Spanish liqueur.
It takes its name from its 43 ingredients – primarily fruits, herbs, and spices – and is sweet and richly vanilla-flavored, with underlying notes of spice and citrus.
Want to save this recipe? Enter your email below and we’ll send the recipe straight to your inbox!

Traditionally, cocktails made with Licor 43 are creamy, sugary, and at least a tiny bit decadent, although there are, of course, a few exceptions to that rule.
You can serve them for practically any occasion – fun and formal alike – and for most holidays, as well.
Now, without further ado, let’s check out 10 of my favorite Licor 43 cocktails.

If caffeine and coffee are your vices of choice, then you’ll appreciate the rich, vanilla latte flavor of the carajillo.
You’ll make it with brewed espresso, Licor 43, and several ice cubes.
It tastes just like a sweet, iced drink you’d get from Starbucks, only this one has a bit of a kick to it, as well.
Fortunately, Licor 43 only has 31% alcohol by volume (ABV), so the kick won’t be too potent, and you won’t feel too hungover the day after drinking one.

Of all the various pina colada recipes out there, this one is probably one of the most straightforward ones to make.
It uses only three ingredients – pineapple juice, Licor 43, and coconut cream – and takes no more than 3 minutes to make.
You’ll shake everything up with some ice in a cocktail shaker; then, you’ll pour it into a chilled glass to make it extra icy cold.
This pina colada might be a bit sweeter than others you’re used to drinking, but you’ll still get that nice balance of coconut and pineapple.

These teeny tiny beer mugs won’t get you loaded, but they’re certainly a ton of fun packed into adorably miniature packages.
Want to save this recipe? Enter your email below and we’ll send the recipe straight to your inbox!

All you’ll need to make them is Licor 43 and some heavy cream to create the foamy, frothy tops of each stein.
However, to make them look right, you’ll also need to buy the tiny beer steins.
Otherwise, they’ll just look like foamy shots in a shot glass.

The Morir Soñando is thick and creamy, and it’s a bit like an orange creamsicle in a glass.
It’s light, sweet, and incredibly refreshing, not least of all because it’ll remind you of eating orange sherbet.
You can use rum as the base if you like, but I feel that the Licor 43 gives the drink a much sweeter, more ice cream-like taste.
I also tend to use whole milk instead of half-and-half because I prefer the taste.

If you’re looking for the perfect complement to any summer barbecue, it’s hard to beat this grapefruit-based sangria.
It takes about 10 minutes to make, but it has a ton of great stuff in it that makes it smell, taste, and look fantastic.
Primarily, you’ll use white grape juice, Licor 43, and Prosecco.
However, you’ll also add raspberries, pomegranate seeds, strawberries, mint, and lots and lots of ice.
The colder and more chilled this drink is, the better. It’s supremely fruity and wonderfully light and invigorating.
Whether you’re swimming, throwing lawn darts, or just grilling out, this is one summer drink you won’t want to miss.

This simple, 5-minute cocktail is just what its name says it is – a vanilla margarita. It has all the tart bitterness of a traditional margarita.
However, the simple syrup and Licor 43 also give it a delightful vanilla sweetness that’s hard not to love.
I’m not sure why – maybe it’s the lime juice – but you’ll taste some of the Licor 43’s herb flavor in this drink, as well.
I like to garnish it with strawberries for a strawberries-and-cream-like combination, but you can choose whatever you want.

Although you can whip up this birthday cake cocktail in just 5 minutes, it’s as decadent and festive as an actual birthday cake that would take longer to make.
It’s thick and creamy, and you’ll make it with Caruva Horchata Cream Liqueur, Licor 43, pineapple juice, ice cubes, frosting, and sprinkles. (The last two are for “salting” the rim.)
It’s the perfect dessert drink to celebrate turning 21, 42, or 87.
If you like sweet treats with your alcohol, this drink will give you the best of both worlds.

This 3-minute, four-ingredient drink may look like a tall glass of bubbly soda (and it does have some of that in it), but the taste is much different.
The rum complements the Licor 43 nicely, and together, they provide the drink with a warm, rich, vanilla-flavored base.
When you add Coca-Cola to it, it tastes a lot like Vanilla Coke.
For that reason, I usually leave out the lemon juice; I like the sweet taste of Vanilla Coke well enough without adding any additional tartness and zest.
However, if you like a bit of citrusy zestiness in your cocktails, then be sure to add the lemon juice and the lemon slice as a garnish.

Of all the Licor 43 cocktails on this list, this one is probably the tartest and most zesty.
You’ll make it with tequila, fresh lemon juice, fresh orange juice, and a dash of bitters for taste.
There is a slight bitterness to the drink, but then, I think all tequila-based beverages are a little bitter.
Mostly, though, you’ll get the bright, tangy notes of citrus fruits.
The ice and cold juices may cool you down at first, but the alcohol will quickly warm up your belly.

I’ve tried a lot of apple pie cocktail recipes over the years, and I’ve even enjoyed a few of them, but none of them gets the flavor so close to perfect as this one.
To make it, you’ll need vodka, Licor 43, apple cider, ground cinnamon, and freshly squeezed lime juice.
The Licor 43 gives the drink a warm, rich vanilla flavor, and the apple cider and cinnamon complement it perfectly.
You’ll barely taste the vodka, and the lime juice just makes everything a bit brighter.
It isn’t precisely an apple pie in a glass, but it’s pretty darned close.