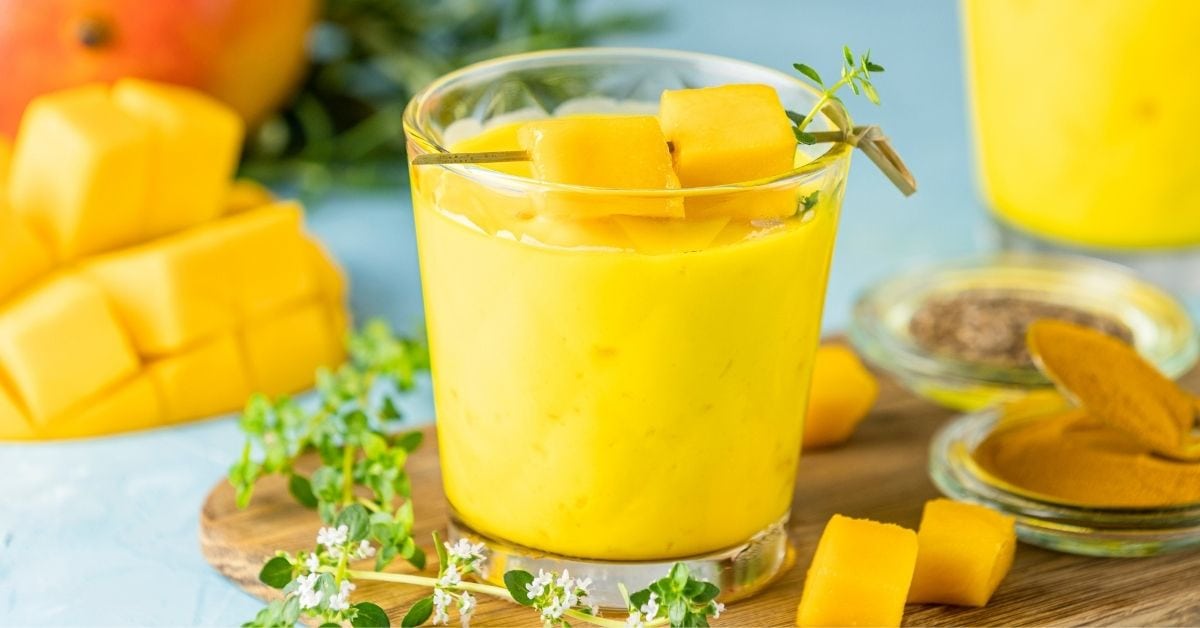 As much as I love Indian food, I can honestly say that beyond chai tea, I don’t know a lot about Indian drinks.
Or at least, I didn’t know a lot about them until I decided to do some digging.
Want to save this recipe? Enter your email below and we’ll send the recipe straight to your inbox!

And by ‘digging,’ I mean lots of Googling, sifting through potential recipes, and making and taste-testing the ones that looked like winners.
Of course, I found several new drinks that I loved, and then came my next problem: picking which ones to include in this list!
In the end, I went with the ten that I thought would most likely be enjoyed by others.
If you’re interested in experimenting with Indian drinks, this list is a great place to start.

If you like drinks that are thick, creamy, and sweetly fruity, you’ll love the strawberry coconut lassi.
Yogurt drinks, called lassis, are very popular in India, and this one is a twist on the classic.
You’ll still make it with Greek yogurt, ice, and cardamom (per the usual recipe), but you’ll also add coconut milk, honey, and strawberries, making it sweeter and fruitier than the original.
If you’re already a big smoothie drinker, then you should definitely start with this one when trying new Indian drinks.

Filter coffee is pretty much just coffee, but the process for making it is different from our usual method: letting the Keurig or coffee maker take care of it.
This way takes a bit more effort on your part, but when I tried it, it seemed like the flavor was richer and darker than Keurig coffee.
As usual, you’ll add your milk and sugar to taste.

Here’s another variation on the traditional lassi. This time, you’ll use mangoes instead of strawberries.
Want to save this recipe? Enter your email below and we’ll send the recipe straight to your inbox!

The recipe also calls for regular milk, sugar, and a dash of cinnamon.
The result is another thick, creamy drink, but this one has a much more tropical flavor.
The mangoes come through really strongly in this drink, and it’s a bit sweeter, as well.
To be honest, the cinnamon didn’t add much flavor that I noticed, but it’s possible that I didn’t add enough.
The next time I make it, I’ll add a bit more, along with some ginger, I think.

Also known as spiced buttermilk, masala chaas is similar to a lassi, but it’s not nearly as sweet and has a lot more spice.
Additionally, there’s actually some heat to this drink, which I was expecting thanks to the chili, ginger, and chat masala, but I didn’t expect that level of heat.
Despite that, though, it was surprisingly refreshing. It’s also quite a bit lighter than the other recipes for lassis on the list.

If you’re looking for something less thick and creamy and more bubbly and lighter, paneer soda may be the better option for you.
It’s sugar water, with ice and soda water for chill and bubbles.
You’ll also add a dash of rose water to it to give it a nice pink color and a phenomenal smell.
Luckily, the rose water comes through in taste a little, as well. It’s sweet, lightly flavored, delightfully fizzy, and perfect for hot summer days.

Nimbu pani may be hard to remember, so you might want to call this by its English name – Indian limeade.
It’s somewhere between lemonade and limeade on the flavor scale, but it has a light yellowish-peachy color, more like lemonade than limeade.
The difference between American lemonade/limeade and nimbu pani is that nimbu pani also contains a lot of spices in addition to the typical sugar, water, lime juice recipe.
For this particular one, you’ll use salt, chaat masala, dry mango powder, ground cumin, and black pepper.
It’s an interesting, spiced but not necessarily spicy flavor that’s hard not to love.

I started not to try jaljeera because it didn’t look all that appetizing in the picture.
In fact, I passed it up completely the first week I was trying Indian drinks.
However, during the second week, I had some stomach trouble, and I remembered reading that jaljeera could help with those kinds of issues, so I whipped it up and gave it a try.
I was pleasantly surprised! First of all, it’s full of fiber and mint, both of which can — and did! — help out a lot when your digestive system is out of sorts.
But secondly, it didn’t taste bad either! It’s certainly not something I’d drink regularly for pleasure, though. There’s a slightly medicinal taste to it.
However, I could easily see myself drinking it again in the future if I needed the specific health benefits that it provides.

For the final lassi on the list, I decided to go with one that’s more fresh and minty than sweet.
It has a great salt, cucumber, and mint flavor that’ll remind you of a green smoothie.
It’s an excellent option for the summer months, and it’s easy to make.
You’ll need only six ingredients – cucumber, yogurt, mint leaves, roasted cumin powder, black pepper, and salt – and even less time and effort to pull it together.

If you’ve ever brewed tea from loose tea leaves, then you can make Assam tea.
Named for the region where it’s produced, Assam tea is simply a potent, caffeine-packed variety of black tea.
All you’ll need to make it is water and the loose tea leaves (and a teapot, of course).
Just as you would with any black tea, you can add sugar or not, depending on your preference.
Furthermore, you can drink it hot or pour it over ice or refrigerate it once it’s ready.
You can also make the tea with cold water, but your steep time goes from 5 minutes to about 12 hours.

Chai tea is probably one of the most well-known Indian beverages, thanks primarily to Starbucks.
Luckily, you don’t need Starbucks to brew delicious chai tea on your own.
All you’ll need is water, sugar, whole milk, and loose black tea. Then, you’ll need to add the spices that give it its distinct flavor.
You can choose from any of the following: cardamom, cinnamon sticks, ginger, or fennel seeds.
You can also add them all if you want something with lots of extra kick.