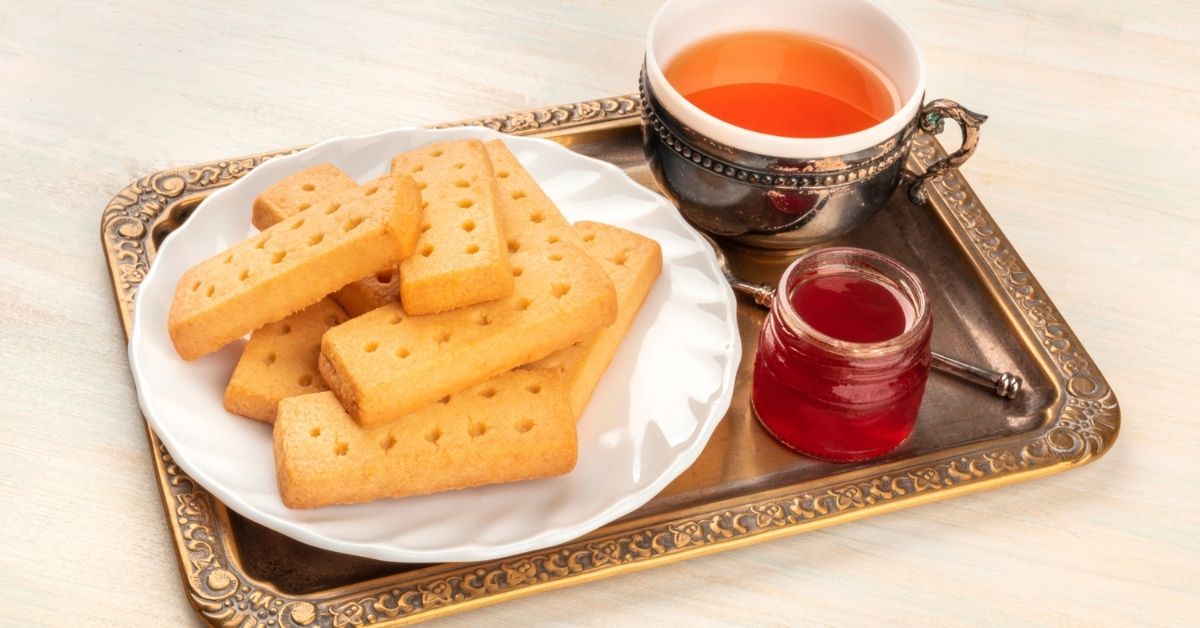 Get a taste of Scotland with these traditional Scottish cookies!
Scotland is famous for its scenic views, but that’s not all. Just as its breath-taking highlands, hills, and lochs are a must-see, its desserts are also a must-try.
Want to save this recipe? Enter your email below and we’ll send the recipe straight to your inbox!

Did you know that the scrumptious shortbread originated in Scotland?

Made with a blend of butter and vegetable shortening, the Scottish shortbread has a lovely combination of crispy, crunchy, buttery, and crumbly textures.
If that made your mouth water, well, brace yourself for more! Let me introduce you to a variety of Scottish shortbreads that’ll make your tastebuds go wild.
Moreover, you’ll also get to know other Scottish cookies such as parlies, oatcakes, and biscuits, as well.
If you’re looking for something new to excite your palate, this collection of Scottish cookies is for you.
You won’t see any chocolate chip cookie recipes on here! Let’s begin.

Let’s get the show on the road with the most traditional of them all.
The classic Scottish shortbread has been around since the 12th century, so trust that the recipe for it is tried and true.
While it was first developed during the 1100s, we have 16th-century Mary, Queen of Scots to thank for transforming it into the crumbly, buttery goodness we now know it to be.
Back in the day, shortbread was considered a luxury item reserved only for special occasions such as Christmas and weddings.
But today, it’s affordable enough to buy or bake any day.

This version of the classic shortbread is infused with lemon, giving it a sweet and citrusy flavor profile.
Want to save this recipe? Enter your email below and we’ll send the recipe straight to your inbox!

Flavored with both lemon juice and zest, you can expect the zing from the fruit to really shine through.
What’s more, is the phenomenal texture.
While traditional shortbread is crisp and firm, these have that buttery, melt-in-your-mouth texture that’s just crazy addictive. They’re so delectable, you can’t stop at one, even if you try.
Also, here’s a fun tidbit for ya. Ever wondered how shortbread got its name? It’s because of its crumbly texture.
This iconic texture is the result of it having a high-fat content from the butter.
The butter prevents the formation of long gluten strands, hence “short.”

If your cheese is looking a little bit lonely, these oatcakes (which are actually crackers) are the perfect accompaniment.
They may not be as pretty as other desserts, but these humble biscuits will absolutely knock your socks off. Afternoon teatime has never tasted better.
With a crisp and crumbly texture and a mild oat, earthy, and walnut flavor, these treats are 100% delightful.
Pair them with any cheese you please. Whether it’s the moldy blue, the sharp cheddar, or the crumbly gruyere, you can’t go wrong.

Here’s another oat cake recipe, because when it comes to these biscuits, you don’t want to run out.
These triangular treats have a different shape than the ones above, but they’re just as terrific.
Not only that, but they also happen to be sugar-free and gluten-free.
Delicious and nutritious? How can you say no to that?
They’re also perfect for all occasions, whether it’s Christmas, Easter, or just a quiet weekend.
Whether you serve them with something sweet or savory, they’ll be a certified hit.
So go ahead and make a whole spread! Oat cakes with jam or marmalade, anyone? Or how about some honey and cheese?

Parlies or Parliament cakes are a type of dark-hued shortbread biscuits.
Legend has it that a shop in Potterow, Edinburgh, which was owned by a certain Mrs. Flockhart (Luckie Fyckie, to locals), created the biscuits in the 18th century and supplied them to the gentlemen of the Scottish Parliament.
You’d think, from their color, that they’re flavored with chocolate, but they’re not.
Infused with ground ginger, parlies have a wonderful warmth and spice to them.
They get their color from either black treacle or golden syrup, which also gives them a mild toffee flavor.
They were originally served with whiskey, which is perfect for combating the cold weather. But nowadays, they’re most often served with tea.

It doesn’t sound like a name for a cookie, but it is. And, these petticoat tails are truly tasty!
Petticoat tails are large, round shortbread cookie that’s cut into cake-like sizes. It is their triangular shape that earned them their name.
Others suggest, though, that its name could have been derived from an old French term “petits cotes,” which means little biscuits.
Whichever theory you want to believe, trust that these petticoat tails are as crumbly and buttery as can be.

I’m pretty sure the name of these cookies alone will get you intrigued. Melting moments – how can that not pique your interest?
These cookies are a staple in Scotland’s afternoon teatime. They’re vanilla-flavored biscuits made of butter, sugar, flour, and oatmeal.
Unlike the usual shortbread cookie recipe that only calls for three ingredients – flour, butter, and sugar – the additional elements in this recipe give the cookies crisp on the outside and tender on the inside texture.
Coated in desiccated coconut and finished off with a glazed cherry in the middle, these cookies are simply divine.

Feast your eyes on these drool-worthy shortbread cookies! This Americanized version of the classic Scottish confection tastes like a million bucks.
These cookies have three amazing layers: shortbread crust, caramel, and chocolate ganache.
Shortbread purists might not approve of this sinful iteration, but who cares? Albeit far from the original, to me, these bars are heaven.
With three different components, you’d think this is hard to make, but not at all. It comes together in just 30 minutes.

It’s just like the classic shortbread, but with a chewy, brown sugar twist.
The use of brown sugar instead of white gives this shortbread a sweeter flavor and a wonderful chewy layer.
It’s still buttery and crumbly, but with the added texture.
If you’re not too fond of sweet cookies, I suggest you use both brown and granulated sugar instead.
The molasses in the brown sugar will still make the cookies chewy, but the white sugar will balance out its sweetness.

Abernathy biscuits are small, round biscuits with a nutty and citrusy flavor from caraways seeds.
They’re not too sweet and are a perfect afternoon teatime treat.
The cookies were named after Dr. John Abernathy, a frequent customer at a certain bakery, who suggested adding sugar and caraway seeds to enhance the flavor of biscuits.
The biscuits became a huge hit and were named after him from then on.