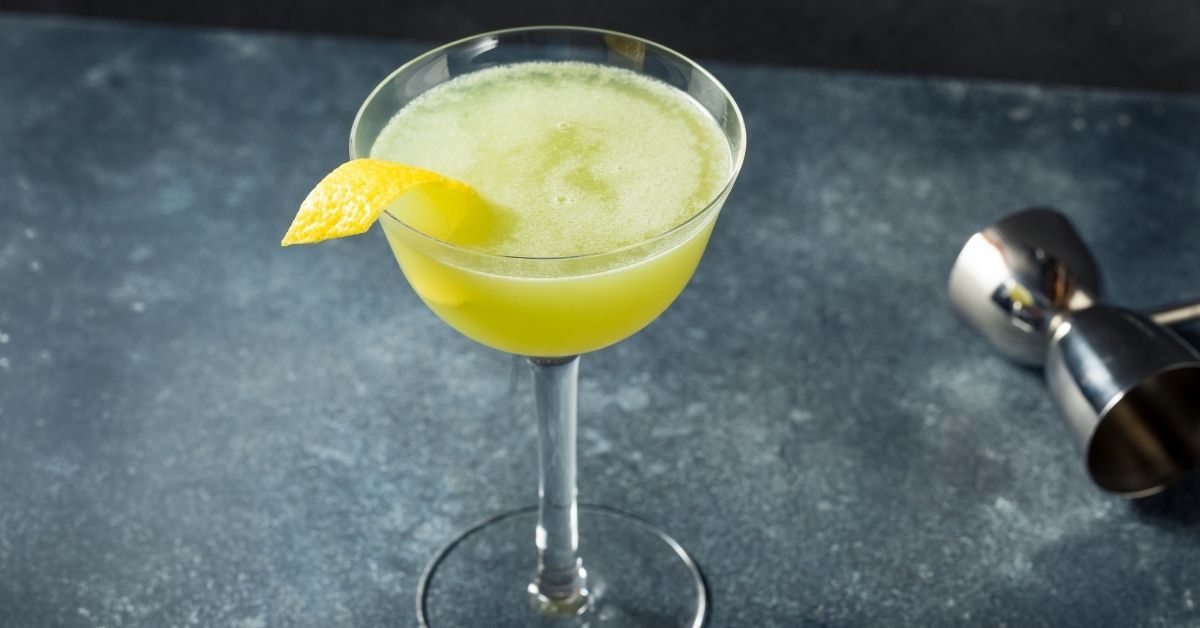 Ahhhhh… Absinthe cocktails.
I know how silly it sounds, but there’s a part of me that loves absinthe cocktails simply because of their names.
Want to save this recipe? Enter your email below and we’ll send the recipe straight to your inbox!

It also could be because absinthe was illegal in the United States for much of my early drinking years.

Seriously, though, how cool (and creepy) are these names? Death in the Afternoon. Necromancer. Corpse Reviver. Chrysanthemum. Smoke and Mirrors.
I’m sorry, but most cocktails don’t get awesome names like those. And that is precisely why I love drinking absinthe cocktails.
Also, in case you’ve never had it, absinthe is a gorgeous, bright green drink (“The Green Fairy”) that tastes strongly of black licorice, thanks to the anise.

Despite absinthe’s emerald green color, this drink is a creamy, frothy white that almost looks like a glass of milk.
If you need a little hair of the dog, you’re in luck with this drink because many people enjoy it for breakfast or brunch.
It has a milkshake-like texture and a flowery, nutty taste that’s hard not to like.

If you’re looking for a light, slightly spiced aperitif with a delicate flavor and a somewhat low alcohol content, the Chrysanthemum is the drink for you.
Unlike most drinks, which use dry vermouth as little more than an afterthought, that’s the base for this dry, gentle drink.
It’s a great before-dinner drink, but it’s so tasty and mild that you’ll probably want another one after dinner, too!

Ernest Hemingway was a notorious drinker, so if he invented a drink, you know it’s good and strong. Death in the afternoon is both.
It’s a simple, three-ingredient drink that combines absinthe, simple syrup, and champagne (or Prosecco).
Want to save this recipe? Enter your email below and we’ll send the recipe straight to your inbox!

It’s beautifully bubbly and has a sweetened black licorice taste that every fan of the ropy candy will adore.
Its eerie, monster green color also makes it ideal for Halloween celebrations.

To have such a devastatingly spooky name – after all, necromancers raise the dead! – this drink is surprisingly light and aromatic.
The alcohol content is reasonably strong, so it packs a nice punch, but the drink’s flavor and smell are just delightful.
It even has a light pink, almost translucent color, for goodness’ sake.
With its floral and wine scent, pale color, and zesty, citrusy taste, most people would think this drink was called the rose petal or something equally graceful.
Call it whatever you want, but just remember that no matter how charming it looks, smells, and tastes, this drink features absinthe, wine, elderflower liqueur, and gin.
It’ll knock you on your butt!

Coffee lovers, don’t get too excited just yet.
This frappe is a frappe in the traditional definition of the word: “an iced beverage that has been shaken, blended or beaten to produce a tasty, foamy, and refreshing drink.”
There’s no coffee in it – just absinthe, ice, simple syrup, and a mint sprig. It’s cold, minty fresh, and heavily licorice-flavored.

Because people often call absinthe “the green fairy,” many absinthe cocktails have the word “fairy” in their names.
The fairy godmother is a combination of absinthe, elderflower liqueur, pineapple juice, lemon juice, and lime juice.
It has a sweet, tropical, citrusy flavor and smells fantastic.
Don’t let the drink’s sweet, floral-like flavor deceive you, though.
It’s a seriously strong drink, and you won’t need more than one or two to feel the buzz.

If ever a mixed drink could be called “garden fresh,” the garden fairy would be the one.
Thanks to the cucumber liqueur, lime juice, grapefruit bitters, and aquavit (made from potatoes), the garden fairy tastes like someone tossed their whole garden in the blender.
It has a clean, fresh taste, and of all the absinthe cocktails on the list, this one probably tastes the least like absinthe.
So if anise-flavored drinks aren’t your thing, this might be the absinthe cocktail for you.

Although you’ll only use absinthe to rinse your glass when making the Sazerac, I couldn’t leave this classic drink off the list.
To me, absinthe and New Orleans go hand-in-hand, and this is the New Orleans mixed drink.
It’s a slightly sweet, primarily bitter drink that tastes strongly of alcohol (in this case, cognac, though you can make it with whiskey, as well).

If you are a fan of contrasts, then you will undoubtedly appreciate the white elephant’s cocktail.
You’ll make it with Bacardi white rum, simple syrup, lime juice, absinthe, and a large twist of grapefruit.
It is slightly sweet, but that sweetness is offset entirely by the half-salted rim and the striking bitterness of the grapefruit.
Plus, the bright, citrusy notes of the lime and grapefruit are a perfect complement to the rich, licorice-like taste of the absinthe.
Fun fact: This drink, too, has a connection to Ernest Hemingway. Although he didn’t invent it, it is named in honor of him.
Because he liked absinthe so much, the drink’s creator named it after Hemingway’s short story “Hills Like White Elephants,” which mentions absinthe.

The swamp thing is another darkly named drink that’s unbelievably light, fresh, and crisp.
It almost tastes like herb-infused cucumber water with a rich absinthe kick.
It’s not overly sweet, but if you prefer a more sugary drink, you can always add a bit more simple syrup.
If you enjoy your mixed drinks with more zesty, citrusy notes, add a little extra lime juice instead.

The smoke and mirrors is basically a daiquiri, but it has an absinthe and mint twist to it. It’s super simple to make, requiring just a few minutes of work.
To whip it up, you’ll need scotch (Islay scotch is recommended), scotch whiskey, lime juice, simple syrup, ice, mint leaves, absinthe, and more mint leaves for garnishes.
The drink is best when served as icy cold as you can get it, and it has a deeply rich, smoky, and sweet flavor that’s only mildly blunted by the freshness of the mint leaves.
It’s a light-colored drink with a bubbly top, and it almost looks like light beer in the glass.
In fact, it’s hard to believe that such a depth of flavor can come from something so pale.

A quick little note on me: If you ever set down a drink in front of me that has something smoking in it, I’ll love it, even if it tastes abysmally bad.
The creepy aesthetic is just way too cool for me not to like it. Fortunately for me (and for everyone else who tastes it), this drink tastes as good as it looks.
Since you’ll only use the absinthe to coat the glass, the drink doesn’t have a strong anise flavor.
Instead, it tastes spicy and smoky and just a little bitter.
When it comes to spooky fall cocktails, this one is high up on my list of favorites. Give it a try, and I bet it’ll make your list, too.

The inside job is sweet and smoky, but it’s a little hard to describe beyond that.
Have you ever seen a movie where a frustrated man sits down at a bar, orders a drink, knocks it back in one gulp, and then slams his empty glass down sharply on the table?
Of course, you have; we all have. It’s pretty much a staple of any drama or action movie.
Well, that’s what this drink tastes like — whatever that man on TV is drinking.

This mostly sour, somewhat herby, and lightly anise-flavored drink is strong, sharp, and not for everyone. It’s a bit of an acquired taste.
I suppose it’s called Neptune’s wrath because of the sea-like colors of the ingredients used to make it.
However, once you mix everything, there’s not much of a color to it. It looks more like an extremely light lemonade with a bit of froth at the top.
You might actually feel a little cheated that it doesn’t look more like stormy waves.
The bright, interesting taste will soon give you something else to ponder, though.

There are three primary flavors in a foghorn cocktail: gin, ginger, and absinthe. If you like one or all of those things, you’ll like this drink.
If you don’t, you might want to find another absinthe cocktail to try.
Of course, it’s simple enough to make.
All you’ll need is Rutte dry gin, triple sec, Lillet Blanc, La Fee Parisienne absinthe (or your own favorite brand), and chilled water or ice.
It takes practically no time to make, even if you add the cute lemon peel twist for a garnish, so if you try it and don’t like it, you won’t have wasted too much of anything.

And last, but certainly not least, we have the absinthe drip.
This is the traditional way to drink absinthe (similar to how Johnny Depp’s character drinks it in the bathtub in From Hell, only without the laudanum drip).
For this method, you’ll need absinthe, a sugar cube, a slotted spoon, and ice-cold water.
Pour your absinthe into the glass, then set the sugar cube on top of the slotted spoon.
Slowly drip the cold water onto the sugar cube so that it melts into your glass, sweetening the absinthe and watering it down just enough so that the intense anise flavor isn’t overwhelming.
Of course, you can always check out the From Hell scene on Youtube if you want to see how Johnny does it.
But again, I must insist that you leave out the laudanum.