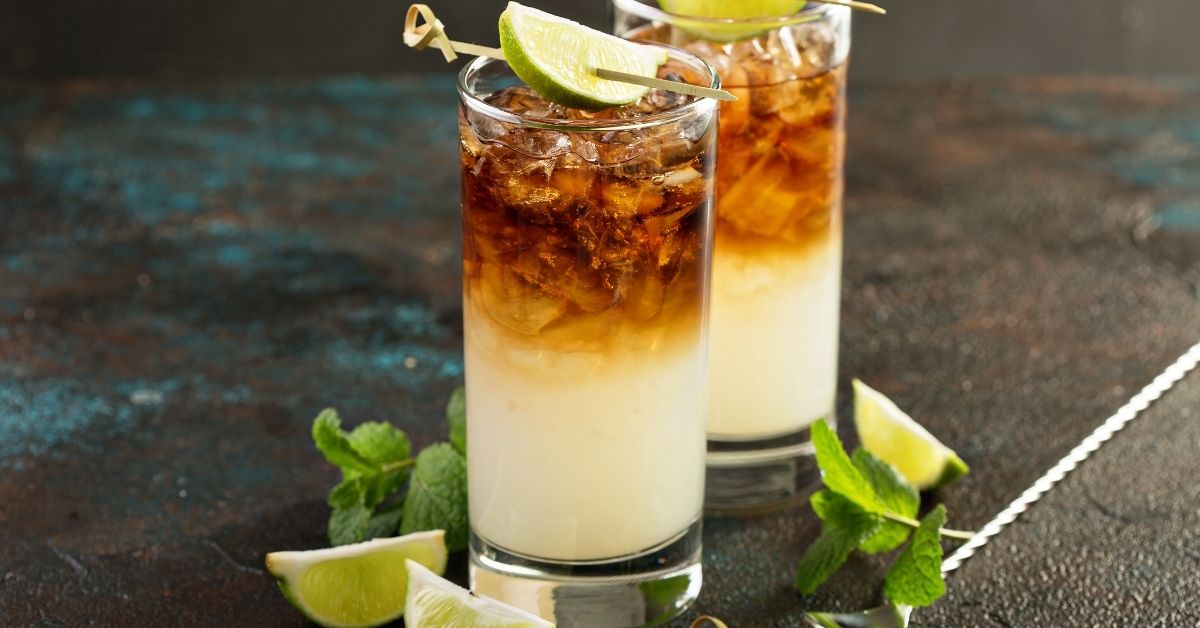 You won’t be able to resist these ginger ale cocktails!
Unlike ginger beer, which contains alcohol, ginger ale is a type of carbonated drink flavored with ginger and some sugar.
Want to save this recipe? Enter your email below and we’ll send the recipe straight to your inbox!

It’s often used in a variety of ginger ale cocktails to provide warmth, a touch of spice, and some bubbles to the mix.

In truth, ginger ale and ginger beer are mostly interchangeable. Using ginger ale will just make the drink lower in alcohol and slightly sweeter.
It also has a more mild ginger flavor.
Not only that, but ginger ale is often far cheaper than ginger beer, making it perfect when serving a crowd.

A classic Moscow mule is made using vodka, ginger beer, and lime juice. It’s fresh, zesty, and super easy to modify.
In this case, you’ll use real berries and Canada Dry Blackberry Ginger Ale for a fruity finish.
However, that flavor isn’t available all year, so you can either add additional blackberry juice or a splash of Torani blackberry syrup.
Another great option would be to buy or make some Crème de Mûre, which is deeply flavorful and will make up for the lack of alcohol in the drink.

This is one of my all-time favorite cocktails. I love the way lime and dark rum complements the spicy flavors in ginger beer.
Of course, this version is a little lighter as it uses ginger ale instead.
You can use white rum if that’s what you prefer, but this drink calls for something deep, dark, and intensely caramel-flavored.
Try to find something aged and very dark.
Want to save this recipe? Enter your email below and we’ll send the recipe straight to your inbox!

And since the drink originated in the Caribbean, look for something local, like Mount Gay Rum Black Barrel or Gosling’s Black Seal Rum.

So, the Moscow Mule has vodka and lime, the dark and stormy uses rum and lime, and now, this recipe calls for whiskey and lime.
Each of these ginger ale cocktails is almost the same, just with a change in the liquor used.
As I said, I much prefer the dark and stormy, but that’s only because I adore rum. But if you’re a whiskey drinker, you’ll love this simple cocktail.

A shandy is essentially a beer with a ‘lemonade top.’
Being served all over the UK, lemonade actually means Sprite (or any citrus soda) and not the lemonade we drink in the States.
Basically, the bartender pours around 2/3-3/4 of a pint and then tops the glass up with lemonade.
It’s what a lot of younger drinkers choose because it’s light and refreshing.
This version obviously uses ginger ale in place of Sprite, which I think would be the perfect fall drink.
In fact, the original shandy was made with ginger beer.
But you see it more now with lemonade in places like Australia, New Zealand, Germany, and Canada.
All that’s missing is a squeeze of lime juice.

Here’s another three-ingredient cocktail that uses ginger ale, lime juice, and booze. Only this time, it’s bourbon.
I know a lot of whiskey drinkers who can sip at and enjoy it straight, but my sweet tooth leans towards bourbon.
This drink is sort of the middle ground between the whiskey cocktail and the Dark and Stormy.
It’s not quite as sweet as the latter, but it’s not quite as strong either as the former either.
It’s the perfect middle ground for those looking for a super simple and extra tasty cocktail with a kick of spice.

Pimm’s was first created in 1823 by James Pimm in London, where the gin-based fruit cup was already incredibly popular.
A gin fruit cup consists of gin, lemonade, ginger ale, and a selection of fruits, such as strawberry, orange, mint, and even cucumber.
Pimm’s combines a slightly sweet and spicy flavor, which some have said is like a cross between Jagermeister, apple juice, and iced tea.
Sounds odd, I know, but if you like gin cocktails that aren’t overly sweet, this is the one to try.

Also known as a Mexican Mule, this drink (as you may have guessed) consists of ginger ale, lime juice, and tequila.
Like rum, I also love tequila. So this is another drink I make and order often.
One way I like to spice this up (literally) is to use homemade jalapeńo ginger beer.
Trust me, it’s such a subtle heat, but it’s so good against the tequila and ginger flavors.
Or, if you don’t want to start fermenting things at home, try adding a dash of this jalapeńo simple syrup.

Hibiscus has a very specific sweet yet sour flavor that’s a little bit floral and quite close to cranberry in taste.
When cooking or making drinks, it’s best to use dried flowers, which are super affordable and will last forever if you keep them in an air-tight container.
For this ginger ale cocktail, you’ll start by making a ginger and hibiscus syrup, to which you’ll then add ginger ale and champagne or sparkling wine.

Blackberries are used in cocktails for their deep flavor and incredible color.
Where blueberries might wash out when you add other ingredients, blackberries will make any drink vibrant.
Plus, they’re not too sweet but rather have a bit of sourness, which pairs so well with ingredients like vodka and ginger ale.
What’s also fantastic about this recipe is that you won’t need to add any sugar to the mix because the fruit should be more than enough.

Similar to the recipe above, cranberries are a terrific sweet and sour berry that not only makes your cocktail bright and fresh but also adds a ton of natural flavor without any extra sugar.
You’ll notice that this recipe calls for white rum, which is more or less flavorless, other than slight sweetness.
That’s another reason you don’t need simple syrup in here. But if you wanted to use vodka instead, you might need a splash of sugar.

This is the kind of summer drink you’d want to sip on in the sunshine by the pool. It’s light, citrusy, super refreshing, and not so boozy that it’s all you can taste.
You’ll more or less start by making spiked lemonade (the regular kind!) by heating sugar and water until it’s smooth and then stirring in lemon juice, mint, and bourbon.
That alone will be tart and tasty. But when you top it off with ginger ale, you get notes of spice and fun bubbles to boot.

Like lemons, rhubarb is naturally sour, and most recipes it’s used in require a lot of sugar to mellow that tart taste out.
Rhubarb gin is floral, lightly spiced, and full of sweet and sour flavors. Mix that with ginger ale, and it makes a very invigorating cocktail.
If you can’t find rhubarb gin, just make your own! All you’ll need is pink rhubarb, gin, and sugar.
From there, feel free to add strawberries, apples, or oranges to the mix.

Believe it or not, this drink comes from Greyhound terminal restaurants and was made using canned grapefruit juice, sugar, and vodka.
Of course, this version uses fresh juice (grapefruit and lime), but if you can’t find fresh, go ahead and use ready-made.
Just try to find something from concentrate and not sweetened.
You’ve probably concluded that this drink is pretty tart and bitter, and you’re right. So, if you prefer sweet drinks, it might not be for you.

Not too long ago, people would drink plain old, non-alcoholic ginger ale, and it was known as a horse’s neck, though I don’t know why.
A buck comes from this, adding citrus and a spirit. The name is suggestive of a horse bucking, as in, this drink has a kick.
When you think about it, the Moscow mule and the dark and stormy are variations of bucks since they use a base of ginger ale (or beer), lime juice, and a spirit.
Traditional buck cocktails used brandy, which was readily available and pretty cheap to buy.
This twisted recipe calls for gin, which is lighter and more fragrant.

The vodka press is a type of mixed drink that calls for vodka (naturally), soda water, and citrus soda, like Sprite. You’ll often see it with a wedge of lime, too.
If you’re a vodka-soda fan, that will be enough for you.
But if you’re looking for something a little different, there are just a couple of simple swaps to make this spiced version.
Instead of soda water, you’ll use ginger ale, and rather than Sprite, try using orange seltzer. You’ll also add orange juice to boost that flavor.

This two-ingredient cocktail calls for just ginger ale and whiskey, along with plenty of ice.
Yes, it’s very similar to the buck recipe above, and in fact, some people even call this a horse’s neck. It changes depending on where you are, I guess.
Of course, this drink doesn’t include lime juice, though feel free to add a dash if you want.

I mentioned at the very beginning that ginger ale cocktails are perfect for feeding a crowd.
Since it’s so much cheaper than ginger beer, you can make a table full of drinks for a lot less than it would cost if you used ginger beer.
To give you an idea, a 6-pack of Canada Dry ginger ale will cost less than $3 in a large supermarket.
A 6-pack of ginger beer, on the other hand, is closer to $6.
Ginger ale is also lighter, has more bubbles, and is sweeter, which I like in a cocktail.
For this punch, you’ll blend cranberry juice, sparkling wine, apple cider, ginger ale, and rum.
Again, you’ll want to choose dark rum here since this is for the holidays.
I decided to use alcoholic apple cider, which is sparkling, so I omitted the wine, and it came out delicious!