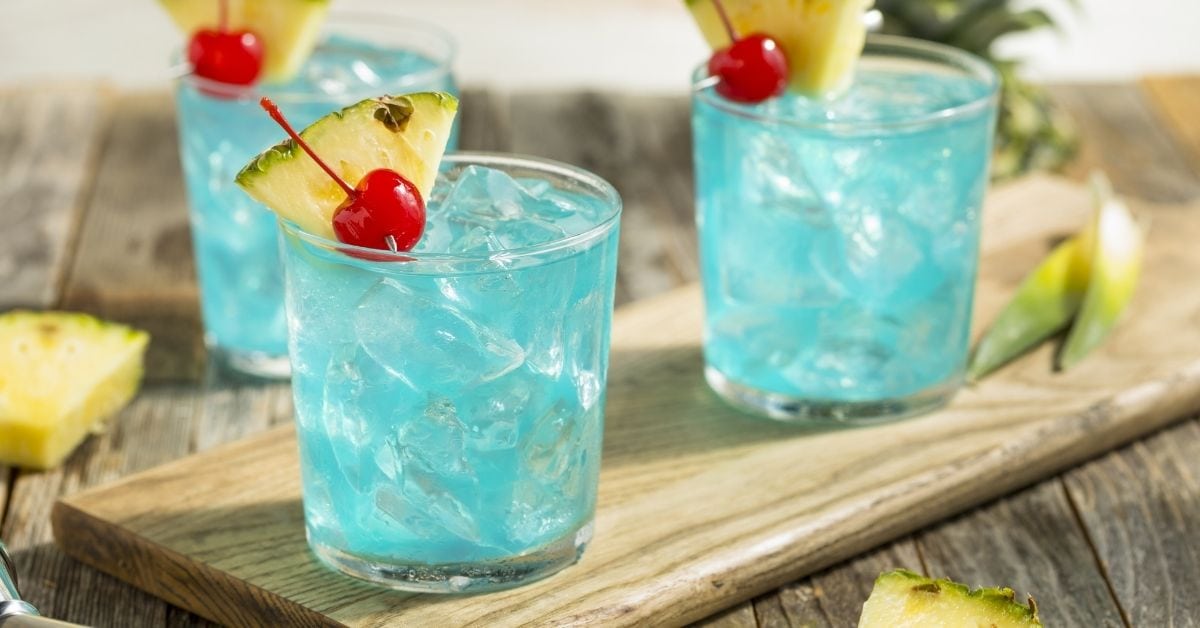 If you’re looking for mixed drink options that are light, bubbly, and incredibly zesty, it’s hard to beat Sprite cocktails.
Like most cocktails, they’re easy to make and require very little time or effort on your part.
Want to save this recipe? Enter your email below and we’ll send the recipe straight to your inbox!

However, unlike some cocktails, those made with Sprite are usually fizzier and tangier.

Plus, if you like your drinks to have the wonderful citrus flavor of lemon-lime soda, these Sprite cocktails are definitely for you.
Pro Tip: You’ll notice that a few of these recipes don’t actually call for Sprite. However, they do require sparkling water or club soda.
You can easily substitute Sprite in those recipes.
In fact, I do it quite often because I prefer Sprite’s lemon-lime flavor to the hard-to-describe non-flavor of club soda and sparkling water.

This 3-minute, four-ingredient drink is a beautiful blue variation on the standard Sex on the Beach cocktail.
I like to joke that this is the version for couples with kids who have to spend their intimate time in the car in the driveway.
Otherwise, they might be interrupted!
You’ll make it with peach schnapps, blue curacao, vodka, and Sprite.
It’s bright and gorgeous, and it tastes like tangy orange juice with some peaches mixed in for extra flavor.

If the fantastic peach and citrus flavor of this cocktail doesn’t make you love it, then its stunning red, white, and blue appearance will.
And don’t worry; despite its exotic appearance, it isn’t hard to make. You’ll pour and mix your peach vodka, blue curacao, and Sprite over ice.
Want to save this recipe? Enter your email below and we’ll send the recipe straight to your inbox!

Then, you’ll add the grenadine, letting it move to the bottom of the glass to provide the red base beneath the blue center.
Top the whole thing with white and fluffy coconut cream to complete the patriot look.

Port royal punch is beautiful, bright orange, and so good. It combines Sprite, pineapple juice, and mango juice for a wonderfully tropical punch.
Then, you’ll also add spiced rum, grenadine, and orange slices.
It makes a fantastic cocktail that the whole crowd will love, and it’s a nice change from typical cherry-flavored fruit punches.
If you’re throwing a large gathering, be sure you have the ingredients on hand to make an extra batch.

This is one punch bowl that’ll be emptied fairly quickly.

The vodka cranberry is a hugely popular drink in bars all across the world, but once you see how quick and easy it is to make, you’ll make it at home, too.
You can whip it up in just 5 minutes with Sprite, cranberry juice, orange juice, and vodka.
It’s a sparkling, super tart drink with an underlying bittersweet taste that’s hard not to like.
Don’t forget to make the sugared cranberries to use as garnishes. Those things are so good that you’ll be making them for snacks, as well.

The summertime cocktail is almost the same as a vodka cranberry, but you’ll use lemon juice instead of orange juice for a lighter, brighter drink.
It’s citrusy and sweet, and you won’t believe how delightfully refreshing it is.

I’m cheating a little with this one as it’s more of a mocktail than a cocktail, but anyone who knows me knows I can’t pass up the opportunity to shamelessly plug a Shirley Temple.
They were, after all, my favorite childhood drinks.
So if you’re pregnant, underage, or just looking for a great drink that won’t get you drunk, give the Shirley Temple a try.

This delicious drink tastes just like pink lemonade, only it has a fierce vodka kick to it. It’s mostly tart, but there’s an underlying sweetness, as well.
Plus, it’s light pink, bubbly, and beautiful.

If you’ve always wanted to try an old-fashioned but weren’t sure you could handle the strong whiskey flavor underneath, try this version made with brandy instead.
It’s much sweeter and much more bubbly than the typical old-fashioned, and it also has a few extra ingredients.
You’ll make it with Angostura bitters, orange slices, maraschino cherries, a sugar cube, brandy, and Sprite. Add more cherries and orange slices for garnishes.
It’s a sweet, fruit-filled, amber-colored drink that everyone will love.

This simple, transparent drink is elegant, zesty, and incredibly easy to make.
It requires only five ingredients – gin, lemon juice, powdered sugar, Sprite, and a lemon slice – and takes 5 minutes to make.
It’s bitter and tart, and it’ll probably make your mouth pucker a little, but chances are you’ll enjoy it, anyway.

To prepare a classic Tom Collins, all you’ll need is gin, fresh lemon juice, simple syrup, and Sprite.
It’s a lot like the gin fizz above, but the simple syrup gives it a slightly different taste than the powdered sugar.
Either one is an excellent choice if you like bubbly, fizzy drinks with a bright citrus flair.

Crown and Coke is a well-known drink order anywhere, and Crown and Sprite isn’t far behind in terms of popularity.
The next time you whip up a Crown and Sprite, though, try using Crown Royal Peach instead.
It’s sweeter than the original version and will have you dreaming of Georgia in no time.

Crown Apple and Sprite is another sweet Crown and Sprite option. If you prefer apples to peaches, this may be the better bet.
While it’s still sweeter than the traditional Crown and Sprite, the apple flavor has a bit of tartness to it, as well.

Of course, if you also grew up loving the bright, sweet taste of Shirley Temples, then you’ll probably love this spiked version made with orange vodka, as well.
It’s bubbly and sugary-sweet, and you’ll have a hard time sipping when all you want to do is gulp.
The orange vodka gives it a slightly tangier flavor, but it’s no less delectable for it.

My one complaint with many cocktails – particularly in the summer months – is that they’re too sugary and heavy.
That isn’t true of the electric lemonade cocktail.
It’s light, tangy, and tart, and while it’s sweet enough not to be unpleasantly sour, it’s not going to weigh you down and give you the sugar sweats.
Plus, its vivacious blue color is hard not to love.

This sweetly tart drink is a delight to drink even without adding the sugared cranberries as garnishes.
(Add them, though. Your tastebuds and all your guests will thank you!)
It’s a simple 5-minute drink that combines Sprite Cranberry, vodka, cranberry juice, and simple syrup over ice. It’s cold, refreshing, and wonderful.
To be perfectly honest, I much prefer it to the traditional Moscow mule.

I couldn’t finish out this list without adding at least one more brilliantly blue mixed drink to it. I can’t help myself; I’m a sucker for blue curacao.
This particular drink also has coconut rum, white rum, pineapple juice, Sprite, and maraschino cherries as garnishes.
It’s tropical and sweet, and people can see its bright hue from across the room. If you want a sweeter, less zesty drink, substitute coconut water for the Sprite.
However, I think that substitution makes the drink much too sweet.