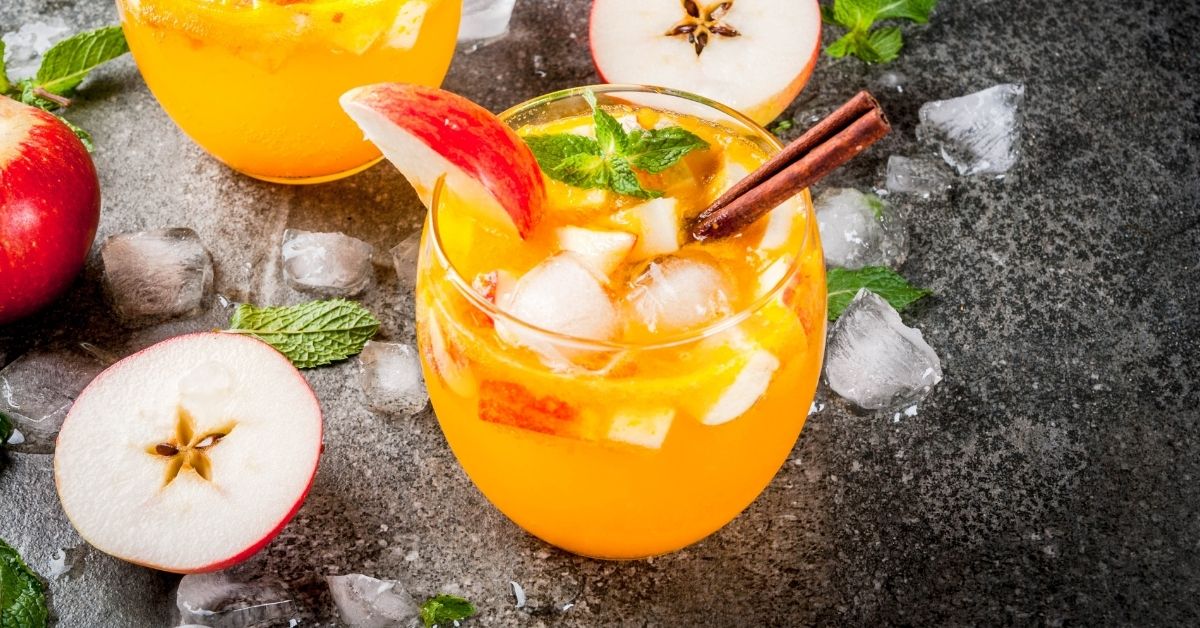 People often associate apples, apple desserts, and apple cocktails with fall.
But they’re also perfect for spring, winter, and summer because they’re delicious, and delicious is good all year long.
Want to save this recipe? Enter your email below and we’ll send the recipe straight to your inbox!

Plus, not all apple cocktails have the warm, spiced flavor of apple cider. Some are brilliantly tart while others are lightly sweet and very spring-like.
Still, others are rich, decadent, and caramel-flavored.

Because apples are so versatile, the apple cocktail recipes you can create with them are numerous and varied, as well.
Whatever occasion you’re celebrating, there’s probably an apple-flavored mixed drink that can help you celebrate in style.
If you need more proof, check out this list of 20 of my favorite apple cocktails.

If fall flavors are your favorite, then you’re probably a pretty big fan of apple cider.
In that case, I can honestly tell you that the only thing better than spiced apple cider is spiked apple cider.
And that’s precisely what this rich, spiced drink is. It’s like a cool fall evening in a single glass.

Whether they like it for its tart, almost sour, flavor or its gorgeous green color, there’s no doubt that people love appletinis.
And if you are one of those people, you can make your own in 2 minutes with only six simple ingredients and this convenient recipe.

The appletini is for people who love Granny Smith apples, but if you prefer the Honeycrisp variety, this is the drink for you.
It’s sweet, cinnamon-flavored, and has just a hint of ginger, but mostly, it tastes like a Honeycrisp apple full of vodka, which is a tasty combination.
Want to save this recipe? Enter your email below and we’ll send the recipe straight to your inbox!

This perfect fall cocktail takes a little longer to make than some of the others on the list, but as they say, good things come to those who wait.
And this drink is the very definition of a “good thing.”
It’s rich and flavorful, sweet and spiced, and features enough apple and brown sugar to delight an entire crowd.
If someone could distill all the very best parts of autumn, this drink would be the result.

The color of this light green drink is absolutely spectacular, and its sweet and sour, apple and lime flavor isn’t bad either.
I know leprechauns aren’t real, but if they were, this is 100% the drink they’d choose.
If you’d like to add some bubbles to the mix without altering the taste too much, top it off with Sprite.

These apple-flavored margaritas are sugary, salty, and delightfully spiced with cinnamon and anything else you want to put in them.
I highly recommend adding the optional star anise, as well. It doesn’t change anything flavor-wise, but it looks fantastic in the drink.

All you’ll need for this potent, bittersweet drink is Crown Royal Regal Apple, cranberry juice, and apple slices for a garnish.
You can also add seltzer if you like a fizzier appearance and a tinglier tickle.

This four-ingredient drink is a boozy caramel apple in a glass, and if that doesn’t sound like a little slice of heaven, I don’t know what would.
And major bonus: It’s strong! Usually, in a mixed drink, you get strong, or you get tasty; it’s hard to find both in one glass.
With this one, though, “both” is precisely what you get.
If you’re looking for a fall treat that’s sweet and potent, you can’t pass up the caramel apple sangria.

I know what you’re thinking: Another apple cider cocktail?! True, but this one is different.
For one thing, it’s much more elegant because champagne makes everything more elegant.
This one combines champagne and apple cider and adds festive gold and silver sugar sparkles to the rim and apple slices for garnishes.
It looks great; it smells great; it tastes even better.

This cold, slushy drink is another great option for fall.
It uses five ingredients – bourbon whiskey, apple cider, simple syrup, lemon juice, and ice – and takes 5 minutes to make.
There’s some sweet spiciness from the cider, but mostly, this drink is sour, but only in the best way.
If you were the kind of kid who chased down the snow cone truck for the greenest, sourest green apple snow cone you could get, you’ll adore this drink.

I’m not sure why, but Prosecco and spiced rum just go together.
You wouldn’t think that would be the case, but they have very complimentary (if different) flavors.
Add a bit of apple cider into the mix, and you have one unbeatable combination.
Plus, its light pinkish-peach color is delightful for spring, Valentine’s Day, or any glamorous affair.

With apple juice, vodka, lemon juice, Prosecco, ice, green apples, and lemons, this punch is tart and tangy in all the right ways.
Even better, this recipe makes enough for several people to enjoy, and you can have it ready in no more than 5 minutes (excluding chill time).
If you’re throwing a last-minute hoorah, this punch is the way to go.

Even if this drink didn’t taste the best, I would still serve it at parties because of how gorgeous it is.
This shiny, shimmering drink looks downright magical, thanks to the edible luster dust, which you can find at any hobby or bakery supply store (or Amazon).
Its taste is incredible, too; if the Evil Queen had brewed Snow White a drink instead of feeding her an apple, this would be the drink she gave her.
No one can resist its glittery charm.

If you love apples – and I mean really love apples – this is the drink for you because apples are almost all you’ll taste.
In fact, it would be difficult to taste even more apple flavor if you were eating an actual apple.
That is one very apple-flavored drink, and it’s super tasty. (There’s a hint of cinnamon, too.)

This sparkly orange drink with the frothy white top is sure to brighten up any table, whether you serve it for brunch, lunch, dinner, or dessert.
It has a unique taste that features the bright tanginess of oranges and the warm, rich sweetness of apple butter and cinnamon.
The combination is odd but not at all unpleasant.

These aren’t the prettiest drinks on the list. Actually, by the looks of them, you’d almost think you were drinking pure apple sauce.
However, they are tasty. They’re cold, slushy, and icy, and they have plenty of apple flavor, along with something that’s almost honey-like.
You’ll make them with ice, apple butter, apple juice (or cider), spiced rum, amaretto, and maple syrup.
You won’t taste a single bit of bitterness in these drinks.

This recipe provides you with two options for making this lovely, amber-colored martini.
If you like the decadent, sugary taste of rum, fix it using spiced rum and apple cider.
If you prefer the bright zing of vodka, use it, apple cider, and some butterscotch schnapps to tone down the bite.
If you don’t enjoy tasting your alcohol while you drink it, go with the rum.
If you prefer a little bite to let you know a drink is spiked, use the vodka recipe instead.

The lovely purple color of this mixed drink will have everyone asking you how you made it, until they taste the first sip, that is.
After that, they’ll be too busy drinking to ask you much of anything. If you’re looking for a tempting Thanksgiving treat, this drink is a great option.
It combines vodka, cranberry juice, apple juice, and ginger beer. You can also add fresh cranberries and apple slices for an extra fruity kick.

It’s hard to believe that something you can make in 5 minutes with only four ingredients could taste so much like a complex, decadent dessert such as apple pie, but this drink does.
All you’ll need to make it is apple cider, Fireball whiskey, vanilla vodka, and turbinado sugar.
The cinnamon from the Fireball and the vanilla vodka pair perfectly with the apple cider.
This drink may have a bit more heat than your typical apple pie, but in all other respects, it’s pretty close to being totally dessert-worthy.

If you want to enjoy the sweet taste of apple pie in a drink without the heat from the Fireball whiskey, use this recipe instead.
It’s also pretty spot-on as a liquid apple pie substitute.
You’ll make it with cinnamon sugar, spiced rum, apple juice, vanilla extract, ice, apple slices, and a cinnamon stick.
It has all the flavor of the apple pie cocktail but none of the heat.
There’s plenty of spice, but it’s all warm and comforting spice, not burn-your-tongue spice.
This one isn’t quite as strong as the apple pie cocktail, though, so if you’re looking for potency, stick with it.