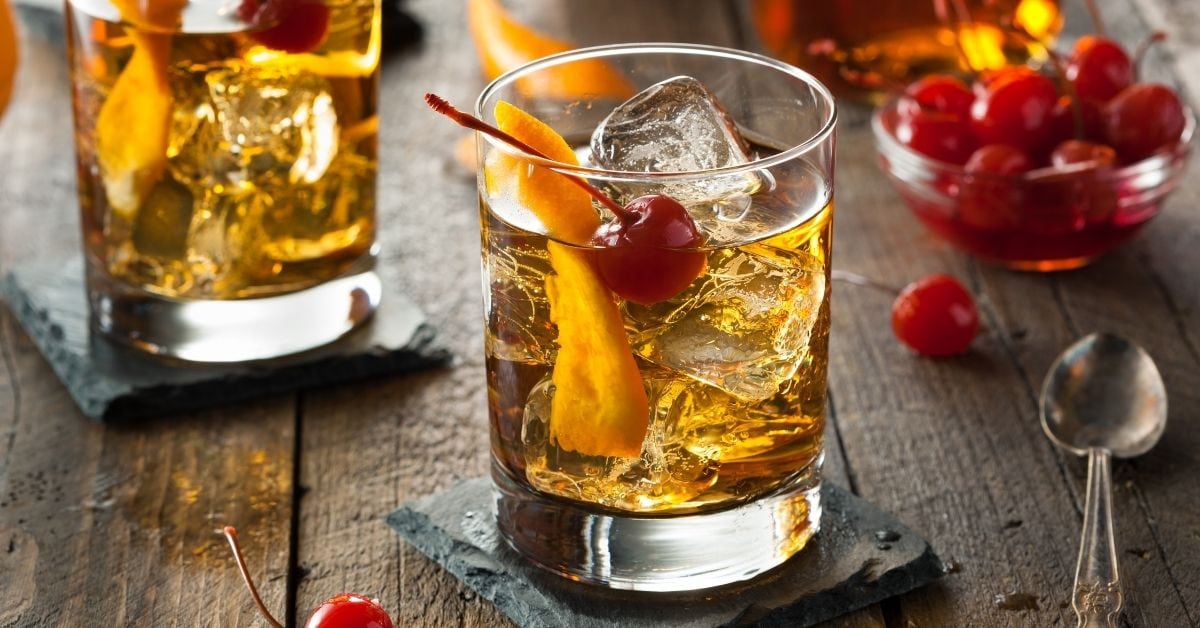 I think I’ve done a pretty good job of giving you guys a wide variety so that whatever you’re in the mood for, you should be able to find something to satisfy it on this list.
Like most cocktails, none of them take much longer than 3 to 5 minutes to make, although you may run across one or two that take just a bit longer.
And each one is distinct and unique, so feel free to try them all. (Maybe just not all at once!)

Most people have heard of blue curacao, but not everyone realizes there’s also an orange curacao.
It’s the same liqueur before manufacturers add the blue dye.
As such, it has the same slightly bitter, mostly tangy orange taste. The pegu club features gin, lime juice, orange bitters, and Angostura bitters.
It’s one of the more bitter drinks on the list, but an underlying sweetness helps turn it bittersweet rather than outright bitter.
Some people find they still need to add simple syrup, though.

This recipe is for the traditional old-fashioned, only it has a lot more orange flavor to it.
It retains its oak-flavored, somewhat peppery taste (if you make it with rye instead of bourbon), but there are bright, zesty citrus notes on top of all the deeper flavors.

This dry, zesty drink is ideal for relaxing and unwinding after a long, tiring day.
It’s a bit sweeter than the first two drinks on the list, but you still can’t call it “sweet.”
Want to save this recipe? Enter your email below and we’ll send the recipe straight to your inbox!

Like the others, there’s a distinct orange flavor that simply will not be ignored.
My only tweak to the recipe would be to leave out the olives and substitute an orange slice or even a lime wedge.
The olives just really don’t go well with all that orange, at least not as far as my tastes are concerned.

The author of this recipe referred to it as being a “booze-forward cocktail,” and I’ve never heard anything described so perfectly.
It’s certainly an alcohol-heavy drink, and if you aren’t a fan of scotch, you won’t like it.
You guys remember Rob Roy, right? — a real “man’s man” — the kind of guy who needs a “man’s” drink.
Actually, I don’t adhere to that at all.
Real men drink whatever real men want to drink, but that’s the vibe this cocktail is going for with its robust, woodsy scotch flavor.

If you’re looking for something with a bit more sugar yumminess in it, try the cranberry orange shrub cocktail instead.
It’s more tart than sweet, but it’s tart, like sour candy, which, as we know, has a ton of sugar in it, as well.
It features a delightful mix of cranberry and orange flavor and is super tasty and perfect for the holidays.

If you like a strong, slightly sweetened whiskey and cola cocktail, then you’ll love this one because that’s precisely what it is, only with a bit of orange zestiness added, as well.

The revolver is another “booze-forward” cocktail – now that I’ve discovered that phrase, I’m going to use the heck out of it – that fans of traditional whiskey drinks will love.
The rich, robust flavors of the coffee liqueur pair perfectly with the caramel and oaky flavors of the bourbon.
Once you add a bit of charred orange peel flavoring on top of that, it’s too good to turn down.

The Bitter Giuseppe isn’t for everyone. As you might’ve guessed from the name, it’s, well, bitter.
But it’s bitter in the way coffee is bitter, the way green tea and red wine are bitter.
So if you enjoy those things – or grapefruit, bitter melon, or any other traditionally “bitter” food or drink – then you’ll probably love this cocktail.
If so, you’re in luck because it’s simply effortless to make.
All you’ll need is Cynar, sweet vermouth, lemon juice, and orange bitters. It takes less than 5 minutes to pull together.

The Martinez is halfway between the Manhattan and a martini, taking the best parts of both. It’s not sweet, but it’s not overly bitter or tart, either.
In fact, it has a pretty mild taste as far as cocktails go. It’s sophisticated, elegant, and suitable for any occasion.

If you enjoy orange juice and whiskey, then this is the drink for you.
Made with whiskey, orange juice, Cointreau, soda water, orange bitters, and an orange slice, whiskey and orange are all you taste.

If you were hoping for a bright green drink, a la absinthe, the emerald cocktail might be a bit of a disappointment.
However, if you wanted an Irish whiskey twist on the traditional Manhattan, you’re in luck.
This simple, four-ingredient cocktail is a staple of St. Paddy’s Day celebrations.
You’ll make it with Irish whiskey, sweet vermouth, and orange bitters. Toss in an orange peel for a garnish.
It’s an alcohol-flavored cocktail for anyone who loves whiskey, though the orange bitters and sweet vermouth help tone down the most astringent notes.

The apple cider cocktail is the ideal fall drink, as long as you don’t mind tasting your alcohol when you drink it.
Mostly, this tastes like apple cider – sweet and spiced.
However, the bourbon comes through, as well, with its rich, earthy notes, and the lemon juice and orange bitters brighten up the overall flavor.
Stick an apple slice and some thyme in as garnishes, and you’re all set, although I like to add an extra dash of cinnamon and brown sugar to mine to make it a bit sweeter.

I’m not usually a fan of whiskey and chocolate. If I’m going to have dessert with a drink, I want a drink that’s lighter and not so abrasive.
However, something about this chocolate old-fashioned just works.
I think it’s the rich combination of decadent flavors – dark chocolate, caramel, vanilla, spices, whiskey, and orange bitters.
You’d think such potent flavors would clash, but they don’t.
They blend seamlessly to make the ideal after-dinner mixed drink.

This recipe adds a blood-orange twist to the traditional sidecar, and it is phenomenal!
It has a lovely reddish-pink color, is chilled and tangy, and has just enough fruitiness to make it sweet.

The bamboo cocktail is one drink that’s as dry as its name, but what can you expect from something made with dry sherry, dry vermouth, Angostura bitters, and orange bitters?
Despite that, though, it goes down smoothly.
It’s light and fragrant, and every so often, you’ll get these delightful nutty notes that set off the whole drink.

If you’re looking for a drink to help you celebrate any special occasion, it doesn’t get much better than the champagne cocktail. After all, it’s a classic!
This one takes a few liberties with the traditional recipe, but it’s still just as bright, light, and sweet as the original.
You’ll make it with a sugar cube, orange bitters, chilled champagne, and lemon juice.
If you want something with a bit more kick to it, you can add Cognac, as well.

The desert wasteland is another mixed drink for those who love the combination of orange and whiskey.
It takes 5 minutes to make and uses only four ingredients: whiskey, Cointreau or triple sec, orange bitters, and lemon-lime soda (like Sprite or 7-Up).
It’s whiskey-heavy but still extremely refreshing, which makes its name more ironic than anything else.

If you like drinks that are tangy but have a sharp bite of bitterness underneath, you’ll love the tangerine basil bourbon cocktail.
None of those things sound like they go together, huh?
And really, they don’t, but that’s what makes the drink so good.
There’s no way basil simple syrup, bourbon, tangerine juice, and orange bitters will blend into one flawless concoction.
Instead, you’ll get to taste all four distinct flavors at once, making it a real party for your tastebuds.

Of all the whiskey cocktails on this list, this one is one of the sweetest, though it’s still very much booze-forward. (Last time. I promise!)
The orange bitters, pomegranate molasses, and even the red vermouth add just enough sweetness and spice to make it not so whiskey-heavy that non-whiskey lovers can’t drink it.

I’ve used a hundred different recipes for the Moscow Mule over the years, and while I can’t say for sure that this one is the best, I can’t think of one better at the moment.
To make it, you’ll need ginger beer, vodka, club soda, lime juice, orange bitters, powdered sugar, and crystalized ginger-lime slices or fresh mint for the garnish.
It’s a fresh – and refreshing – drink that perfectly balances on the line between bitter and sweet, and the ginger beer base adds an incredible depth of flavor that you just can’t beat.