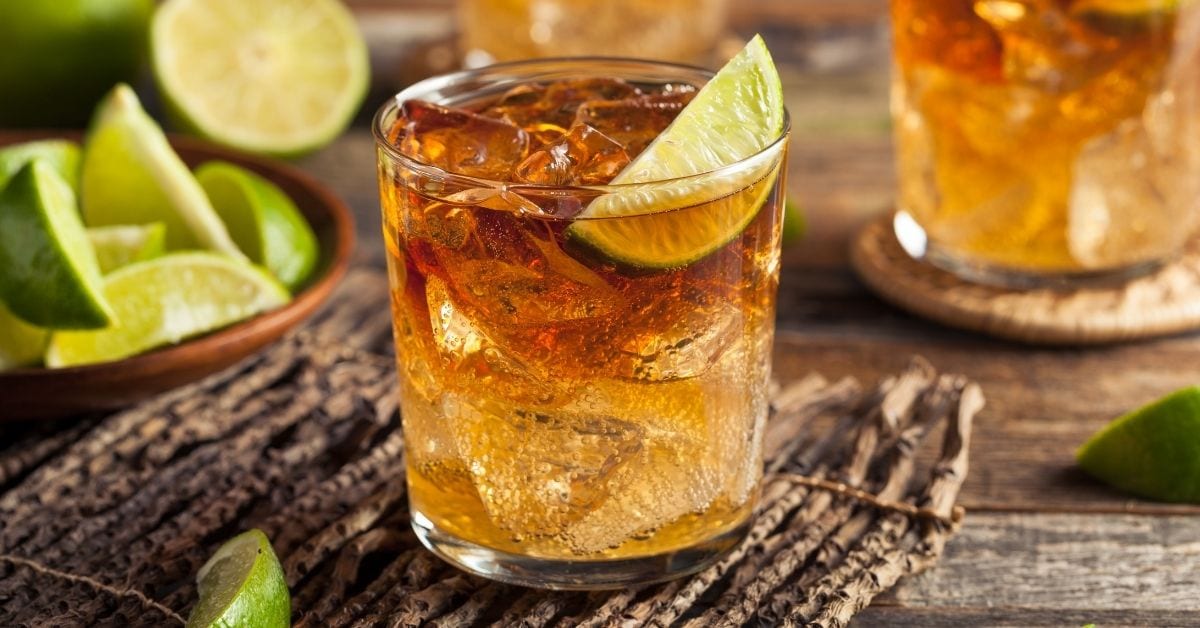 Of all the different cocktail bases out there, rum cocktails are probably some of my favorites.
They’re ideal for people who like a strong buzz but don’t love the taste of alcohol.
Want to save this recipe? Enter your email below and we’ll send the recipe straight to your inbox!

Rum seems to blend well with most ingredients, creating a mixed drink that almost tastes alcohol-free (in most cases).

There are a few excellent rum drinks for those who like the strong stuff to take center stage.
But for the most part, rum blends into the background, letting the other ingredients take center stage.
For this list, I’ve pulled together 20 rum cocktails of all kinds – sweet, rich, alcohol-heavy, alcohol-light, tart, tangy, and everything in between.
I hope you’ll find something you like!

Let’s start with one of the classics – and one of the cocktails that lets you taste your alcohol while you’re drinking it.
The dark and stormy takes 2 minutes to make and uses only four ingredients.
You’ll mix ginger beer and dark rum to create the rich, spiced alcohol flavor.
Add some ice to cool it down and a lime slice for extra zest and color, and you’re all set.

This sweet, fruity drink is absolutely delicious.
Its taste will remind you somewhat of a Mai Ta, only for this one, you’ll use significantly more dark rum than you would in a Mai Tai.
That gives it a deeper, richer, slightly smoky flavor that’ll put you in mind of grilled fruit kebabs. It’s easy to make and takes only 5 minutes.
Want to save this recipe? Enter your email below and we’ll send the recipe straight to your inbox!

All you’ll need is dark rum, white rum, orange juice, pineapple juice, grenadine, and Angostura bitters.
It has a bright, fun color and is relatively strong, so sip it slowly and with caution.

This refreshing summer drink has a lot going on in its glass: spiced rum, white rum, creme de banana liqueur, blackberry liqueur, orange juice, pineapple juice, lime juice, and grenadine!
That’s a whole bunch of flavor to pack into one small glass, but it’s so good.
It has a distinctly tropical taste, but the spiced rum adds an intricate complexity underneath that.
If you’re looking for something that gives you beach vibes but isn’t overly sweet, the rum runner is the drink for you.

When it comes to rum cocktails, you can’t overlook one of the most famous – the daiquiri.
There are many variations on how to make it, but I believe in keeping it simple.
This recipe does just that, allowing you to create this popular drink with only three ingredients: rum, lime juice, and simple syrup.
It’s slightly sweet, somewhat tart, and perfectly balanced in terms of flavor.
If you want an extra special summer treat, put the ingredients into a blender instead of a cocktail shaker and add lots of ice.
Blend it until you have a delightful frozen treat with the same great taste.

Speaking of classic rum cocktails…
You just knew the pina colada was going to make the list, as well!
You’ll need frozen pineapple, ice, aged rum, cream of coconut, pineapple juice, and lime juice.
Blend everything until it’s chunky and slushy, and stick a cherry and a cutesy umbrella on top.
Then you can sit back, relax, and pretend you’re Rupert Holmes.

Caribbean rum punch is the absolute best drink you can make if you want to get buzzed but never taste the alcohol.
Even though this punch has ¼ cup of dark rum and ¼ cup of rum, you’ll barely taste it beneath the orange juice, lime juice, pineapple juice, and grenadine.
Having a cup of this is like having a cup of punch from every childhood birthday party you ever attended, only with a kick.

The painkiller is a darker, richer, and creamier version of the pina colada.
You’ll make it with dark rum, pineapple juice, orange juice, cream of coconut, and a dash of nutmeg.
It has a smoky and spiced tropical taste that’ll not only kill your pain but will also transport you to a whole other place in space and time – somewhere lovely, warm, and with lots of sand.

This warm winter cocktail takes a little longer to make than most others on the list, but it still shouldn’t take more than 10 minutes.
Still, it tastes so good that even if it took 30, you’d still want to make it. It’s spicy and buttery and unbelievably decadent.
It’s almost like drinking apple cider mixed with a creamy butterscotch candy. And in case you’re wondering, yes, it also smells phenomenal.

The pink and peachy hurricane is a New Orleans favorite, and with this recipe, you can make it in your kitchen in just 10 minutes.
Thanks to the passion fruit juice, orange juice, and lime, it’s fruity and wonderfully tart.
The grenadine gives it its lovely color, and the mix of dark and white rum is unbeatable.
Add some simple syrup to sweeten it to your tastes, and then top it off with fruit garnishes. It’s the ideal drink for practically any occasion.

The Mai Tai is another fruity, tangy classic that nearly everyone knows (and most people love).
It combines pineapple juice, light rum, orange curacao, lime juice, orgeat, and dark rum.
It would almost be too tangy to be enjoyable without the rum and orgeat, which give it some charred, nutty undertones that help mellow out the whole drink.

This refreshing Jamaican drink is ideal for the hotter months of the year and is reminiscent of the Mai Tai, only a bit sourer.
Still, if you like your refreshing cocktails to pucker your mouth a bit, Planter’s Punch is the drink for you.
It calls for dark rum, but if you want to sweeten it a little, use spice rum instead.

If you asked most people to describe rum cocktails, they’d probably use adjectives like “sweet,” “spiced,” “fruity,” or “light.”
And eight times out of ten, that’s pretty accurate.
But rum cocktails can also be devilishly decadent, as is the case with the Bushwacker cocktail.
You’ll make it with light rum, coconut rum, Kahlua, Bacardi 151, vanilla ice cream, and milk.
That alone is enough to give you a sugar high, but then you’ll top it off with Cool Whip (and maybe even some chocolate shavings and a dash of cinnamon) for extra yumminess.
If you’re looking for a sweet dessert drink that’s so good you’ll want to lick the glass clean, try this recipe for the Bushwacker.

I don’t know what it is about pineapples and rum that lends itself so nicely to garden herbs, but whatever it is, I love it.
The pineapple basil rum cocktail is light, tropical, and incredibly fresh.
It’s mellow and easy to enjoy and would make an excellent brunch cocktail.

Although there are six ingredients listed in this recipe, you’ll only need three of them – dark rum, lemon juice, and simple syrup.
It tastes precisely how the name makes it sound – like a sour rum cocktail. If you like wholly sour and rum-flavored drinks, leave out the simple syrup altogether.
If you prefer your cocktails to be sweetly tart, increase the amount of simple syrup you use.
Top the whole thing off with lemon slices, maraschino cherries, and mint for aesthetics.

I love mojitos so much. They’re probably my favorite cocktail – definitely in the top three, at least. They have such a crisp, fresh taste and are so easy to make.
All you’ll need is lime juice, sugar, mint leaves, white rum, club soda, and ice.
They’ll take 5 minutes to whip up, and they’ll be a hit with everyone sitting around the table.

Bees spend all day feeding on flowers and making honey, so it’s only natural to assume that kissing a bee would leave you with a lot of sweetness on your lips.
This creamy, indulgent drink will, too.
You’ll make it with heavy cream, aged rum, ice, and honey simple syrup.
The honey flavor pairs perfectly with the rum, and the heavy cream adds thickness and depth to the texture and flavor.
It’s not quite a dessert drink, but I wouldn’t look at you funny if you decided to make it one.

This simple, three-ingredient cocktail looks like overly creamed coffee and tastes like heaven in a glass.
You’ll make it with root beer, spiced rum, and coffee creamer, and it’s fantastic.
It’s thick and creamy and combines the dark sweetness of root beer with the vibrant spiciness of Captain Morgan (or whatever spiced rum you prefer).
It takes 3 minutes to make and will have you coming back for another glass and maybe another one after that.

If you’re looking for something bubbly, zesty, and tart, you can’t really beat the rum rickey.
All it needs is light rum, lime juice, club soda, ice, and a lime wedge.
It tastes pretty much like lime-infused rum, and that’s certainly not a bad thing.
Drop in a few maraschino cherries to liven up the presentation and to give yourself a sweet treat when you’re done drinking it.

When fall and winter roll around, I prefer warm cocktails with rich, spiced flavors that smell as good as they taste.
The winter spiced apple cocktail with rum fits those parameters perfectly.
You’ll start with a liter of apple juice in a saucepan. To that, you’ll add your cinnamon stick, lemon peel, and cloves.
When your kitchen starts to smell like the holidays, add the rum.
Let it warm a little more (without boiling), then pour it into glasses, add some apple wedges, and serve and enjoy.
Each drink is a little taste of a winter wonderland.

If you’re looking for a drink that’s both sweet and tart and ideal for sipping, look no further than this recipe for the rum sidecar.
It takes the traditional sidecar recipe and – yep! – adds rum.
You can make it in just 5 minutes with only three ingredients – golden rum, Cointreau, and lemon juice.
It’s wonderfully zesty and refreshing and light enough to enjoy even on the hottest days.