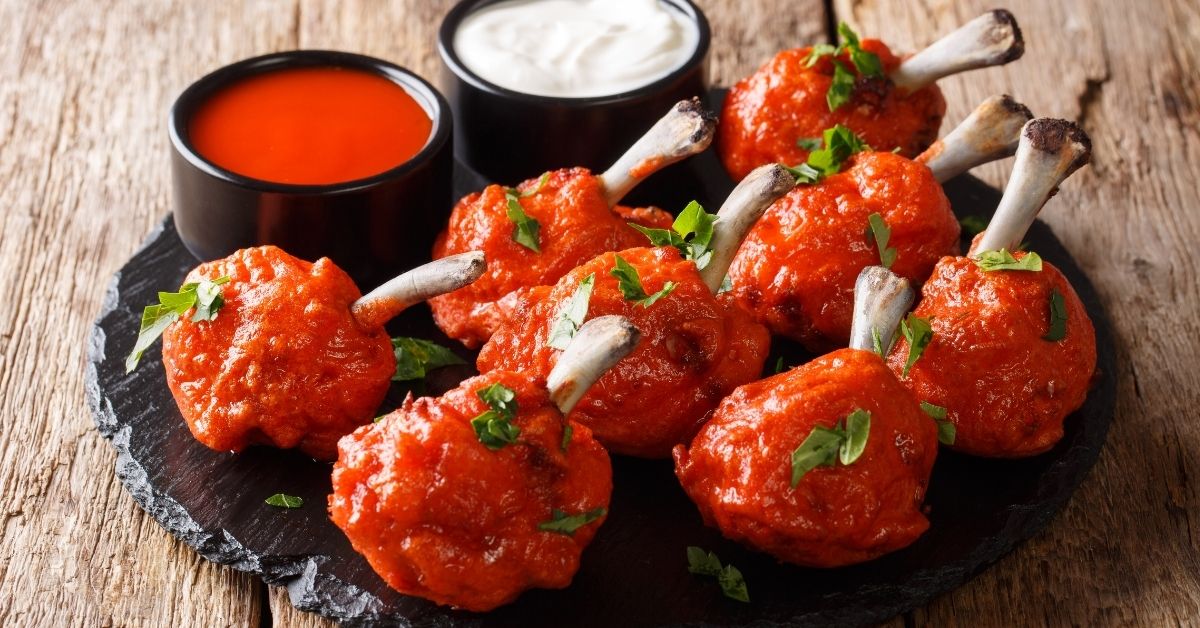 Chicken appetizers are usually a pretty safe choice at any gathering.
Chicken is super versatile, yet mild enough on its own that even the pickiest of eaters can enjoy it.
Want to save this recipe? Enter your email below and we’ll send the recipe straight to your inbox!

I highly recommend trying out the garlic parmesan wings because they’re crispy, salty, and bursting with cheesy garlic flavor.

Plus, they’ll make such a nice change from spicy buffalo or messy BBQ.
Whether you want to serve something hot and spicy, like buffalo chicken potato skins, or make something cold ahead of time that you can keep wrapped in the freezer, you’ll find it on this list.

I’d be willing to bet that buffalo wings are one of the most popular chicken appetizers around.
Have you ever been to a BBQ or Superbowl party and not seen a big platter?
They’re the perfect finger-food size and are super easy to mingle with. Plus, they’re ridiculously tasty.
I love this recipe because you can set them cooking and walk away for a few hours while they soak up all that incredible flavor.
Though they’ll be cooked at that point, the extra time in the oven is vital if you want them to be crispy on the outside.

This is the perfect chicken appetizer to make ahead and bring along to a party.
These travel so well, and you can even leave them whole, then cut and plate when you arrive.
The longer these sit in the fridge, the firmer they’ll be. Ideally, you want the cheese cold enough that you can pick these up without the tortilla slipping.
Since the filling contains diced tomatoes with green chilies, there is a touch of heat.
Want to save this recipe? Enter your email below and we’ll send the recipe straight to your inbox!

But as it’s mixed with cream cheese, it’s not overpowering, and I’m sure even the kids will love these.

Nachos will always be a crowd-pleaser, and I love that you can make a huge batch just as easily as something smaller.
Basically, if you’ve got a large baking tray, you can make enough to feed a crowd in minutes.
I prefer to line my trays with parchment to ensure nothing sticks, and I always pre-bake the chips, so they don’t go soggy.
I also like to add plenty of cheese, and the key to keeping it melted for longer is to serve these right on that hot tray.
The best thing about making such a larger batch is that you can even make one half plain for the kids, with just cheese, and then load up the other side with your favorite extras.

Buffalo chicken dip combines everything you love about buffalo wings and puts it into an easy-to-eat dip.
Instead of sticky fingers and leftover bones, you can dive right into this bowl with your chips and devour every last bite.
You’ll start by cooking the rotisserie chicken and hot sauce until it’s bubbling and parts of the chicken turn crispy.
Then, mix blue cheese dressing and cream cheese into the hot pan and stir until it’s melted.

As much as I love sticky BBQ chicken wings, I think I might prefer dry rub wings.
Although this recipe includes dreamy garlic and parmesan butter sauce, the wings start with a simple dry rub of cayenne powder, paprika, and garlic powder, along with a seasoned flour mix.
This will guarantee your wings will come out super crispy on the outside. I don’t know about you, but I hate chewy chicken skin on my wings!
Once the wings are juicy and crisp, you’ll then toss them in the sauce before serving.

Not only does this recipe include a fantastic green chili sauce that you’ll want to put on everything, but it also includes beer!
You don’t have to worry about bland chicken with this dish. Instead, after you’ve seasoned it with cumin, salt, and pepper, you’ll cook it in a heavenly blend of green chilis and light beer.
I used Land Shark, but any light Corona-like beer will do. It adds a light, fresh taste, along with a touch of sweetness.

I know that bacon goes with pretty much anything, but I happen to think its best friend is chicken.
There’s just something about the mild, meaty flavor with that intense salty goodness that works in every form you can think of.
It doesn’t hurt that the whole thing gets tossed in a blend of brown sugar, chili powder, and cayenne pepper too.
Of course, BBQ sauce would work well here, and I’d advise you to serve these with ranch dressing.

Just in case buffalo chicken isn’t spicy enough for you, how about putting all that hot sauce deliciousness into a jalapeño pepper?
These are kind of like jalapeño poppers on crack because you have double the spice.
Unlike regular poppers, which have a creamy filling to help mellow out the heat, these babies are all fire.
So, I’d recommend serving with extra blue cheese dressing, or maybe ranch.

If you’re looking for something lighter, these chicken salad bites might just be the thing.
They’re cool, creamy, and bursting with terrific texture, thanks to the crisp shells, chewy cranberries, and buttery walnuts.
I prefer to use phyllo cups because they’re insanely crisp but not crunchy.
I find wonton wrappers have a harder overall texture once they’re baked.
Although, if you wanted to make these ahead or bring them with you somewhere, wonton cups would stay crunchy for longer.

Beef is very rich and has such a specific taste.
The same can be said for pork, and though those flavors are yummy, you won’t always want your meatballs to be so strong.
Using ground chicken will give you the same great texture and a lovely, gentle, meaty flavor. But it will also ensure the other seasonings can come through.
Chicken is also usually leaner and slightly healthier. So you can top these with melted cheese and not feel a second of guilt.

Remember I said earlier that chicken and bacon are a match made in culinary heaven? Well, there’s only one thing that can make that partnership better.
Ranch.
Do you dream of ranch like I do? Do you put it on everything from fries to pizza? Let’s be honest; it’s pretty much the king of condiments.
That blend of herbs and spices makes this dip pop, and trust me when I say you’ll need to make extra.
To be honest, this is still super tasty if you serve it cold.
I like to mix the cream cheese with sour cream and ranch seasoning using my handheld mixer. That way, it’s velvety smooth.
But, of course, you can’t go wrong baking this with added cheddar cheese!

Do people really throw out potato skins? That’s blasphemy in my house, where it’s potato skins or bust!
I like to serve potato skins as a side dish. In that case, I’ll keep the fluffy potato filling and mix it with the tasty extras so they’re bigger and more filling.
But when you’re making appetizers, it’s best to scoop most of the potato out, so these aren’t too big.
Try making these tasty little potato puffs with the leftovers!

The key to chicken appetizers is to keep them simple and keep them small. Appetizers should be finger food, right?
You won’t want your guests fighting for a seat so they can slurp a bowl of soup.
And you won’t want them elbowing each other at the sink while they try to wash their hands.
That’s why I love wraps so much. You can make any number of great flavor combinations, and they’re self-contained and more or less mess-free.
Plus, if you use mini-tortillas, they’re just the right size for your guests to snack on while they mingle.

Taquitos literally means “little tacos,” so you more or less know what to expect. If you use corn tortillas, you’re making taquitos.
If you use flour tortillas, you’re making flautas.
Either way, they’re typically filled with beef, pork, or chicken, cheese, and salsa.
This recipe takes it a step further and includes a creamy filling made using cream cheese, sour cream, salsa, chicken, cumin, garlic powder, chili powder, spinach, and cheddar cheese.
In making this creamy filling, you can easily stuff these and fry them without having to worry too much about anything spilling out.
Serve these hot with plenty of guacamole.

Chicken tenders might generally be on the kids’ menu, but I don’t know a single grown-up who would turn down a plate.
I don’t know if it’s nostalgia or just the fact that chicken tenders are super juicy and flavorful, but I know I can’t resist them.
This recipe uses Bisquick for the coating, speeding things up and leaving you with such a delicious golden coating.

More often than not, you can throw together a few simple ingredients, serve them on some crunchy toast, and it will be a hit.
French bread baguettes are ideal for this kind of chicken appetizer because they will hold their shape even after cutting it into slices.
For added flavor, try rubbing a clove of garlic over the bread once it’s toasted and drizzle with balsamic vinegar before serving.

Cilantro can be a pretty divisive herb, so if you’re firmly in ‘Team Hate-It,’ please scroll down to the following recipe.
For those of you that can’t get enough of this fragrant ingredient, this eggroll will knock your socks off.
As the name suggests, cilantro is the crucial ingredient here. Along with the chicken, you’ll need a full cup, and you’ll taste it in every bite.
Mix those with diced jalapeños, salt, sugar, pepper, shredded cabbage, dried cranberries, mayonnaise, and rice vinegar, then fill your wrappers.
Once these are deep-fried, they will smell incredible. But be careful! That filling is piping hot.

Serving flatbreads is a clever way to keep your guests happy and make something big and tasty in little to no time.
Since flatbreads are usually made with unleavened bread, like pitas or naan, you can whip up a few different flavors and serve them in slices for your guests to choose from.
I might be a BBQ chicken lover (with lots of smokey cheese, please), but this light flatbread recipe is just to die for.
As this bakes, the cherry tomatoes will soften and burst, releasing their juices over the top.
Then, the chicken and spinach will crisp up around the edges, and the cheese will melt.
Are you drooling, too?

Crack chicken gets its name from the fact that it’s completely addictive. I swear, one bite of this stuff, and you won’t want to share.
Unlike the dip recipe from above, the filling here is just a blend of cooked chicken, bacon, cheddar cheese, and ranch dressing.
So, this is a little lighter without all that cream cheese and sour cream.
Since you’ll be relying on the cheese to help provide moisture, I don’t advise buying pre-shredded.
I know it’s convenient, but it doesn’t melt the same as freshly grated.

This grown-up twist on ants on a log is such a clever way to serve yummy buffalo chicken in a lighter, more healthy way.
Your low-carb friends will go nuts for this recipe!
Not only does it have a generous serving of spicy buffalo chicken, but it’s also got some amazing texture thanks to the natural crunch of the celery.