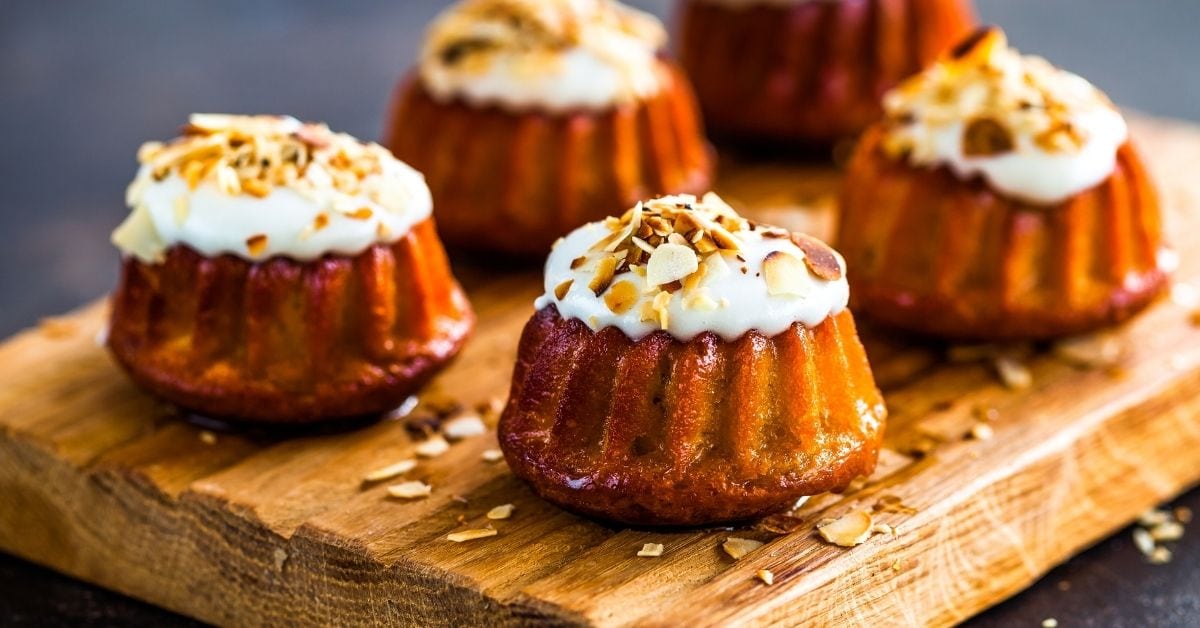 Rum isn’t just for drinking anymore, as rum desserts are also incredibly good.
When it comes to strong tropical or fruity drinks, you’ll almost always find a bit of rum in the mix.
Want to save this recipe? Enter your email below and we’ll send the recipe straight to your inbox!

There’s a lot you can do with rum beyond just the standard rum cake, rum raisin ice cream, and bananas Foster.

Some of the recipes on this list were things I would never have thought about trying to make if I hadn’t run across the recipes first.
Once I tried a few of them, though, I knew I had to pull together a list of rum desserts because these were just too good not to share.
Enjoy!

If you’re going to make rum cake, you might as well make the best, moistest, most buttery rum cake there is, and this recipe will help you do just that.
The rum cake itself is delicious, but the butter-rum sauce is what truly sets it apart from other cakes, and you’ll make it with four simple ingredients: butter, water, sugar, and rum.
Once the cake is ready, you’ll poke holes all in it and fill those holes with the butter-rum sauce.
Then, you’ll pour even more of it on top. It’s unimaginably incredible.

The boozy grilled pineapple would make any beach bum proud. It’s the most summery dessert you’ll ever taste.
Plus, it’s not all that bad for you either, especially if you leave off the vanilla ice cream. (Trust me, I’m not advocating for that. It’s delightful!)
Just be sure you give the pineapples ample time to marinate, and don’t forget the rum sauce.
As long as you do those two things correctly, you can’t really go wrong.
Want to save this recipe? Enter your email below and we’ll send the recipe straight to your inbox!

If you’re looking for a hearty, comforting dessert that feels like coming home, you’ve to try the apple rum raisin bread pudding.
The crust is warm and thick, the custard is perfectly spiced, the apples are tartly sweet, and those rum-soaked raisins pull the whole thing together.
This is one dessert that’s darned hard to beat.

You can make this simple, 15-minute treat with only seven ingredients. The bananas are sweet and tender, and the buttery rum sauce is exquisite.
Plop a large scoop of vanilla ice cream on top and enjoy!

All you’ll need to make this velvety smooth, ultra-creamy rum raisin ice cream are raisins, rum, rum flavoring, heavy cream, condensed milk, and vanilla extract.
The light flavor of the vanilla comes through strongly, but each time you bite into one of those delectable rum-soaked raisins, you’ll get a burst of rich flavor.

If you’re looking for something sweet, easy, and melt-in-your-mouth tasty, these chocolate coconut rum balls are just the thing.
You don’t have to do any actual cooking with them. In fact, you don’t even have to heat anything or melt any chocolate! Sounds too good to be true, right?
It isn’t. You can whip up a whole batch of these chocolatey, coconut delights in just 20 minutes with a minimal amount of work.

If you prefer your desserts to have a blast of zesty, slightly tart flavor in them, then you’ll go nuts for these mojito cupcakes.
Don’t worry, though; between the rum, sugar, and vanilla, there’s enough subtle sweetness to satisfy your sugar cravings, as well.

This divine cake is like carrot cake, only made with rum-soaked bananas.
Between the sultanas, pecans, cream cheese icing, and numerous spices, it’ll be hard to find anyone who doesn’t appreciate this dense, moist masterpiece.

Whether you need it for a dessert that calls for it or just like to smear it across your toast, homemade butter-rum sauce is quick and easy to make.
You’ll only need butter, brown sugar, heavy cream, dark rum, and flaked sea salt. You can have it ready in 10 minutes or less.

This four-ingredient dessert takes less than 10 minutes to pull together, and it will blast your taste buds into overdrive.
It’s a lot like the bananas Foster, only more buttery, more rum-flavored, and (at least in my opinion) even more delicious.

I’m a firm believer that sweet, tasty drinks are just as good for dessert as anything you have to chew, and it doesn’t get much sweeter or much more appetizing than a pina colada.
This three-ingredient drink is unbelievably easy to make, and it’s perfect for enjoying while sitting oceanside or by the pool.

This wonderfully spiced cake is dense, crumbly, and just a bit on the dry side.
Luckily, the fantastic, sticky rum glaze balances out the dryness of the cake perfectly.
It’s rich and spicy, and it smells as good as it looks. Serve it for dessert or as a sweet breakfast treat. Either way, you won’t find many people complaining.

You’ll get all the rich, buttery flavor of shortbread with these cookies, but they’ll also come with a uniquely sweet, almost honeyed taste, thanks to the rum.
They’re also gorgeous; the glaze almost looks like molten gold.

Whether you already love tiramisu or have never really had a taste for it, you’ll enjoy this recipe for the traditional Italian dessert.
Each vanilla cake finger is overflowing with boozy, coffee yumminess, and the layer of cashew cream around them is delightfully sweet and nutty.
The rich, powdery topping of cocoa powder won’t hurt your feelings, either.

This thick, hearty bread is sweet enough for dessert but filling enough for a warm, flavorful breakfast.
You won’t believe everything this single loaf of bread has in it.
There are cranberries, raisins, candied lemon and orange zest, nutmeg, cardamom, and other spices, almonds, and more.
Top the whole thing off with powdered sugar for extra decadence.
I don’t want to imply that this German bread is perfect, but… Wait… Actually, yes. I do.
It’s perfect, especially if you serve it with a cup of hot coffee or tea.

I never loved the way these crunchy bars looked, but their taste is a different story.
You’ll make them with chopped pecans, butter, brown sugar, eggs, vanilla extract, flour, red candied cherries, candied pineapple, candied citron, and rum.
They’ll put you in mind of a fruit cake, but somehow, these are better.
They’ll take only 20 minutes to prepare, but you’ll need at least an hour to bake them, so don’t wait till the last minute.

If you’ve never had it before, rumchata is an unparalleled combination of rum, cream, cinnamon, and vanilla, and yes, it’s just as good as it sounds.
These cupcakes are light and fluffy, and once you frost them and cover them in cinnamon, they’re a treat that you will not want to share.

Jamaican banana bread has the same dense texture and incredible smell as traditional banana bread, but you’ll use a few more ingredients in it.
Some of those include cream cheese, rum, lime juice, lime zest, and flaked coconut.
You’ll also add a topping of brown sugar, butter, lime juice, rum, toasted pecans, and more flaked coconut.
It adds crunch, a bit of tartness, and an overall tropical taste that you can’t ignore.

These chewy, chocolatey cookies are just as good as any homemade chocolate chip cookie.
However, they’re less fattening, have fewer calories, and have a superb burst of additional flavor, thanks to the rum and vanilla.

I’m a huge fan of homemade oatmeal cookies, but I also think you can make them even better by adding cinnamon and raisins to them.
If those raisins just so happened to be soaked in a rich, sweet, and sugary rum, then that’s even better.