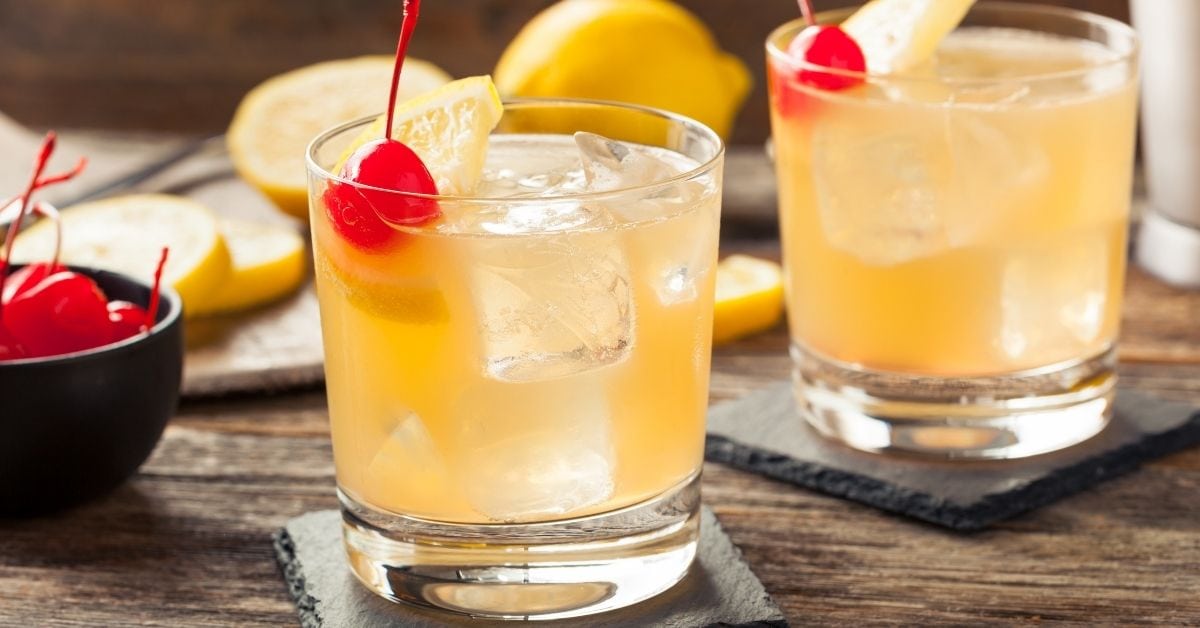 If you’re looking for a drink with a rich, smoky taste that’ll warm up your belly, it’s hard to beat scotch. But depending on your mood, scotch cocktails might be even better.
Too often, when people hear the word “cocktail,” I think their minds go straight to pink, fruity drinks with plenty of sugar and pizzazz.
Want to save this recipe? Enter your email below and we’ll send the recipe straight to your inbox!

However, those aren’t the only cocktails you can enjoy, even if that’s how every girl’s night out movie makes it seem.
So if you’re looking for a more distinguished mixed drink that’s perfect for practically any occasion, check out this list of 20 scotch cocktails.

Of all the scotch cocktails from which you can choose, the old-fashioned is probably the most famous.
(Yes, rye whiskey drinkers. You can make it with scotch!)
If you’re making it using this recipe, you’ll need blended scotch, simple syrup, aromatic bitters, orange bitters, and orange zest.
It has a rich, smooth taste that’ll go down easily and put a little red in your cheeks.

The penicillin cocktail is ideal for the cooler months of the year.
It tastes great, but more than that, the honey, ginger, and lemon juice will help keep you “as fit as a fiddle,” as my grandpa used to say.
An apple a day may keep the doctor away, but this cocktail is no slouch either.

If you enjoy the strong taste of scotch whiskey but need a little something to smooth the edges of its bite, scotch and coke is a good choice for you.
You’ll get the full scotch flavor experience, but the Coca-Cola makes it a bit sweeter and less hard on your stomach.
Plus, it adds caffeine and bubbles and takes only a few minutes to make.
Want to save this recipe? Enter your email below and we’ll send the recipe straight to your inbox!

If I’m being honest, the scotch sour isn’t my favorite drink. It has a potent, unusual taste that’s hard to describe, but it’s not one that I love.
Still, it’s hugely popular with people I know, so I had to add it to the list. Like most scotch cocktails, it’s easy to make, taking only 5 minutes.
All you’ll need is scotch whiskey, lemon juice, simple syrup, an egg white, and a couple of dashes of angostura bitters.

Although not as famous as it once was, the two-ingredient rusty nail still has its fans.
I’ve tried it many ways, but the two-to-one ratio of scotch to Drambuie is the one I like best.
It’s a potent drink that hits hard and fast, but its taste is shockingly mild.
It tastes a bit like honeyed whiskey, and it goes down more smoothly than you’d imagine.

This tart and smoky cocktail got its name from a 1922 movie about a bullfighter, so that should tell you a little something about how well it’s weathered the test of time.
It takes practically no time to whip up, and the ingredients list is short and simple: scotch, vermouth, cherry liqueur, freshly squeezed orange juice, and an orange peel garnish.
The thing about these simple ingredients, though, is that they all have robust, bold flavors that come through loudly, making this one seriously flavorful drink.

If your movie preferences are more Godfather, less bullfighter, then you may prefer this two-ingredient cocktail.
With only scotch and amaretto in it, it’s sweet, smooth, and stronger than it looks.
Mix it up in 2 minutes, stick a lemon peel down in the side, and sit back and look serious while drinking it.
(This cocktail is a whole vibe!)

Named for a famous opera singer from the late-1800s/early-1900s, the Mamie Taylor blends scotch whiskey, lime juice, and ginger ale for a sweet, citrusy, and slightly spiced drink.
If you’re a fan of the Moscow mule, you’ll love this drink as well.
And now, a serious question: Why does it seem like all the best scotch cocktails are from the 1930s or earlier?
Do we just not know how to combine the right flavors anymore?

The Presbyterian is a simple, light, slightly fizzy scotch cocktail that mixes scotch, ginger ale, and club soda.
Some people insist that it’s just a sweetened, watered-down scotch.
To a certain extent, I guess they’re right, but I don’t like the phrase “watered-down.”
It makes it sound like there’s not as much flavor in it, and that couldn’t be further from the truth.
This gorgeous translucent drink has plenty of flavor.
To me, all the club soda does is help lessen the burn you get from really good scotch. It doesn’t affect the taste much at all.

The scotch Collins is the ideal summer drink because it’s cool, refreshing, bubbly, and bold.
Together, the lemon juice and simple syrup make up just as much of the drink as the scotch, making this almost taste like a strongly spiked lemonade.
The club soda gives it a bit of bubble and fizz, and the fruit garnishes add that little extra something to make it look as good as it tastes.

The hot toddy is the drink everyone reaches for when they want to feel good in every way possible.
With over an ounce of scotch whiskey, it’ll give you a lovely alcohol buzz, but thanks to the honey, lemon, and cinnamon, it’ll also make you feel better if you’re under the weather.
I don’t know about you, but I think it’s just what the doctor ordered.

It’s hard to find a drink more perfectly balanced than the affinity cocktail, especially if you use blended scotch for the base.
With equal parts dry and sweet vermouth and a couple of dashes of orange bitters, this drink is the one you’ll want when you need a strong drink with a wine-like taste.

If you like your drinks a little on the bitter side, you’ll go nuts for the Drunk Uncle.
The scotch and vermouth give it a rich, oaky flavor, but the Cynar adds a biting bitterness that’ll make you say WOW!
Adding a grapefruit twist is the perfect addition, especially for people who’ve never had this cocktail before.
It lets them know right away that this one has some kick to it.

The Bobby Burns is another rich, smoky cocktail that dates back to the early 1900s, proving once more that good scotch cocktails are hard to find after that 1930 mark.
To make it, you’ll need scotch whiskey, sweet vermouth, Benedictine, and a lemon peel garnish.
It shouldn’t take you more than a couple of minutes to make, and it tastes best over ice.

This smoky, amber-colored cocktail is one of the few scotch cocktails on the list that smells every bit as good as it tastes, thanks to the rosemary simple syrup.
The cocktail itself takes only 3 minutes to prepare, but you’ll need at least an hour to make the rosemary syrup.
The good news, though, is that your whole house will smell fantastic while you’re making it, so it’s an hour that you’ll undoubtedly enjoy.

This drink is so light, fruity, and fizzy that it’s hard for most people to believe it’s a scotch cocktail. Instead, they think it’s a gin or vodka drink.
It isn’t; it’s good, old-fashioned scotch whiskey. Of course, you’ll hardly taste it underneath the lemon thyme, lemon juice, vanilla simple syrup, strawberries, and sparkling water.
It may not be the most “manly” scotch cocktail on the list, but it is one of the most delicious.

Speaking of drinks people can’t believe are made with scotch… The Caledonian spritzer is just as light and fruity.
Plus, it has a wonderful tropical flavor because of the pineapple juice and Riesling.
You’ll also add thyme syrup and some thyme and pineapple slices as garnishes.
The result is a super sweet, somewhat strong cocktail that’ll have you dreaming of your favorite beach vacation.

If you like martinis but want something stronger and smokier, this smoky martini recipe is the one for you.
It’s quick and straightforward to make, requiring only gin and scotch whiskey.
You’ll mix them both over ice, stirring until the drink is as cold as you can get it.
Then pour it, sans ice, into a lovely martini glass (for the aesthetic, of course) and add a lemon twist garnish.
Its transparent color and smoky flavor will make it the talk of the table.

And last but not least, here’s one of the most delectable fall drinks you’ll ever try – Paris Between the Wars.
It’s an odd name, but it tastes exquisite, especially if fall flavors are your jam.
It’s a gorgeous golden-orange color, and it tastes like honeyed, spiked apple cider with just a dash of lemon for contrast, which is, in essence, precisely what it is.
It takes no more than 5 minutes to make and is as pretty as it is tasty. Plus, it smells great, too.