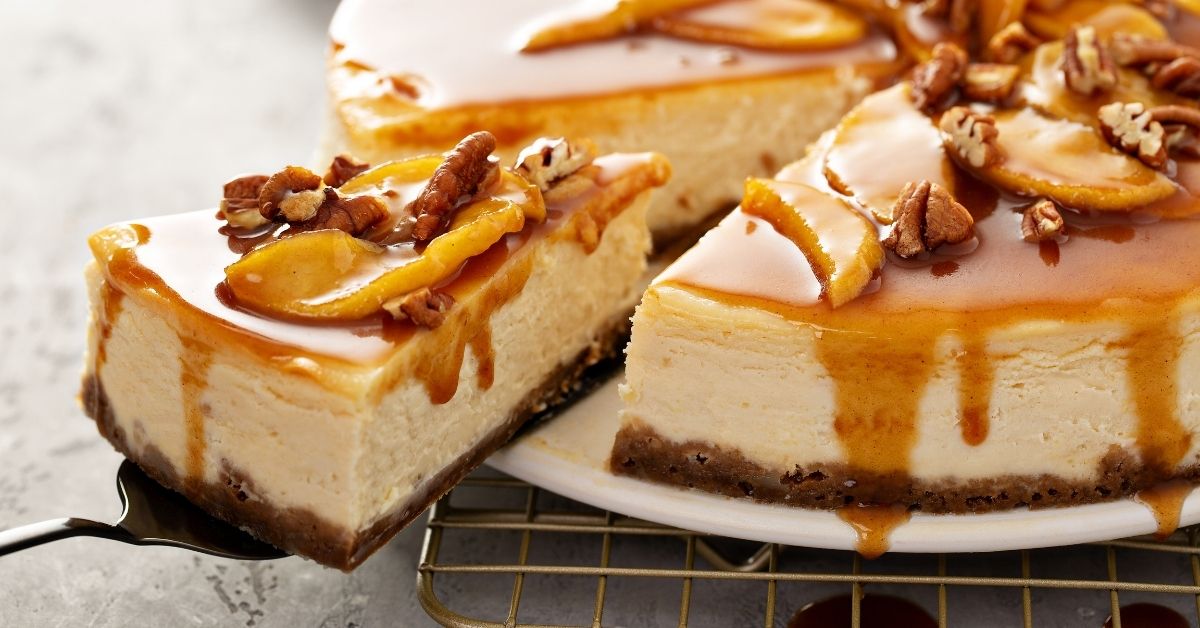 Finish off your turkey dinner with one of these Thanksgiving cheesecake recipes!
For most people, Thanksgiving desserts are all about pecan and pumpkin pies, sweet potato casserole, and maybe even a warm apple turnover or two.
Want to save this recipe? Enter your email below and we’ll send the recipe straight to your inbox!

However, these cheesecake recipes will have you looking at Thanksgiving desserts in a whole new light.

From the apple butter cheesecake to the turtle cheesecake, there is just so much on this list that you can enjoy.
It seems like each one is richer and more decadent than the last.
And don’t worry! Swapping over to Thanksgiving cheesecake recipes doesn’t mean you can’t still enjoy your pumpkin, pecans, and sweet potatoes!
It just means you can try them in a new way.
So sit back, and get ready to find your new favorite Thanksgiving dessert today!

If one look at this pecan pie cheesecake doesn’t make you drool, then you and I are not the same.
The crust is phenomenal and contains cinnamon and crushed pecans.
The filling is the traditional cheesecake filling with an added dose of brown sugar and cinnamon, and the topping is heavenly.
You’ll make it with butter, dark brown sugar, cinnamon, heavy cream, salt, pecans, vanilla extract, and a tablespoon of bourbon if you want a richer flavor.

Any pumpkin lover can tell you that this bright orange pumpkin cheesecake is a must-have for Thanksgiving.
It has the perfect balance of sweetness and tanginess, as all good cheesecakes do, and the pumpkin pie spice and pumpkin puree make it taste and smell fantastic.
Want to save this recipe? Enter your email below and we’ll send the recipe straight to your inbox!

Turtle cheesecake may not be the ultimate in cheesecake decadence, but it’s got to at least be in the top five.
This dessert is 100% over the top, and I’m 110% here for it.
It contains the bright tanginess of cream cheese with a chocolate drizzle, heavy whipping cream, crushed pecans, brown sugar, and rich, gooey caramel sauce.
It’s absolutely a sugar high waiting to happen, but you’ll certainly enjoy the ride.

When it comes to the busiest cooking holidays of the year – Thanksgiving and Christmas – is there anything better than no-bake desserts?
Maybe, but I can’t think of anything right away.
This supremely fluffy pumpkin cheesecake features a crunchy gingersnap crust that’s just out of this world.
It tastes amazing paired with the sweet and tangy taste of the pumpkin cheesecake filling.
Top the whole thing with whipped cream and salted caramel for a bit of extra decadence.

The browned butter pecan cheesecake may not be quite as decadent as the turtle cheesecake, but it’s pretty darned close.
It features a topping of caramel sauce and cinnamon whipped cream, which is so good that you’ll want to eat it all by itself.
The cheesecake filling also features a layer of crunchy buttered pecans, adding a whole other level of awesomeness to this already fabulous cheesecake.

If you’re a bit of a Starbucks caramel macchiato addict, this cheesecake is the one for you.
Besides the usual cheesecake ingredients, you’ll also add espresso and vanilla extract.
Once you top it with whipped cream and caramel ice cream topping, they’ll be no stopping people from descending on it and devouring it.

This one may look like a simple smooth and creamy cheesecake, but there’s more going on than you‘d first suspect.
For example, you’ll infuse the crust with crushed walnuts and brown sugar for a rich, nutty flavor.
Then, you’ll add dark maple syrup to the filling and maple caramel sauce on top.
It doesn’t get much more autumn-esque and delicious than this.

I know what you’re thinking: “Another pumpkin cheesecake!!!!???” I can’t help it.
I love pumpkin desserts, and each of these recipes is just a smidge different from the others.
For instance, this one has a lot more spice and a richer, bolder flavor.

On the other hand, this one uses a homemade caramel sauce, which you’ll pull together using sugar, water, light corn syrup, heavy cream, and unsalted butter.
It, too, contains plenty of your favorite fall spices – nutmeg, cinnamon, and allspice – but the homemade caramel sauce gives it a sweeter, more buttery flavor that sets it apart.

If you like baked cinnamon apples and cheesecake, then you won’t be able to get enough of this tantalizing treat because it combines both of those delicious things.
And the spectacular cinnamon apples aren’t just on top of the cheesecake either.
You’ll find them throughout all layers of the filling, and there’s even some cinnamon in the crust.
Every bite of this cheesecake is overflowing with cinnamon and apple yumminess, so if those are your favorite fall flavors, give this fantastic cheesecake a try.

As a child, I loved visiting my grandparents and staying overnight because they always had apple butter on the table for breakfast.
Smearing that spiced brown deliciousness over a biscuit was the perfect start to my day.
This dessert combines the rich spiciness of apple butter with the bright tanginess of cheesecake.
Not only does it give it a superb taste, but it also gives it a stunning swirled appearance that’ll be the highlight of your Thanksgiving dessert table.

Bring a little bit of New Orleans to Thanksgiving with a pecan praline cheesecake.
It features the bold, decadent flavors of pecans, brown sugar, vanilla, and more and is so easy to make.
It takes over 3 hours, but the biggest part of that is bake time and cooling time. There is some specific prep work involved, but again, it’s so easy that a child could do it.
If you can follow a recipe, making this cheesecake shouldn’t be a problem.

Here’s another great option for making a butter pecan cheesecake that the whole family will love.
It takes a little over an hour and uses only eight ingredients.
All you’ll need is pre-made graham cracker crust, cream cheese, sugar, sour cream, eggs, butter flavor, vanilla extract, and chopped and crushed pecans.
It’s silky smooth but features the delightful crunchiness of pecans. It’s also buttery, nutty, and just a bit tangy underneath.

This easy-to-make cheesecake takes only 20 minutes or less to pull together and another hour to bake.
It’s insanely scrumptious and has a beautiful, tasty topping that you’ll love.
There’s a rich buttery pecan flavor that’ll remind you of the other butter pecan cheesecakes on the list.
However, the addition of caramel makes it even more indulgent and incredible.

It’s hard to get more fall-friendly than a sweet potato cheesecake with a spicy gingersnap crust.
This cheesecake is velvety smooth and will nearly melt on your tongue.
It also features plenty of pumpkin pie spice for both taste and aroma. If you like your kitchen to smell amazing while you’re cooking, this is the dessert for you.

Everything important about this cheesecake is right there in the name: It’s a super creamy white chocolate cheesecake. What could be better?!
If you’re a white chocolate fan who happens to love cheesecake, the answer is “nothing!”
Seriously, though, this dessert really is delicious, and the texture is so luxurious.
Biting into it is like biting into the softest, smoothest, and creamiest thing you could possibly imagine times 10.
If there’s cheesecake in heaven, I think this one is on the menu.

This cheesecake had me from the words “maple bacon,” just like every other maple bacon recipe in the world.
That’s one flavor combination that never tastes bad.
The cheesecake is sweet and smooth, but the bacon adds a bit of savory saltiness that puts this cake in a category all by itself.
There’s also a bit of crunch from the crispy bacon and pecans. That’s always a nice addition to any creamy cheesecake.

The honey pecan cheesecake takes everything you love about shortbread, pecan pie, and cheesecake and rolls it into one delectable dessert.
Then, it tops that dessert off with a melt-in-your-mouth honey pecan sauce that’ll bring you to your knees.
Pro Tip: That homemade honey pecan sauce also tastes phenomenal on ice cream or as a dipping sauce for berries.

This triple-layer cheesecake is an apple pie, cheesecake, and apple crumble all rolled into one.
It’s sweet, apple-flavored, and features a crunchy topping that’s unbelievably yummy.
And believe it or not, this dessert isn’t hard to make despite all those layers and all that flavor and presentation. It takes only 70 minutes from start to finish.

If you love the idea of pumpkin cheesecake but were hoping to do something a bit different this year, try this recipe for mini-pumpkin cheesecakes instead.
They look like little cupcakes, but they combine all the flavor of pumpkin pie with the sweet tanginess of cream cheese.
Top each one off with some cinnamon whipped cream, and they’re sure to be a hit.

Unlike the mini-pumpkin cheesecakes, these mini-salted caramel cheesecakes actually look like cheesecakes, only in miniature.
Each mini morsel features just enough for one or two mouthfuls of heaven, but that just means you can eat more of them.
With their graham cracker crusts, cheesecake fillings, and salted caramel toppings, these things will go fast, so be sure to grab a couple before revealing them to everyone else.
Otherwise, you might not get one at all.