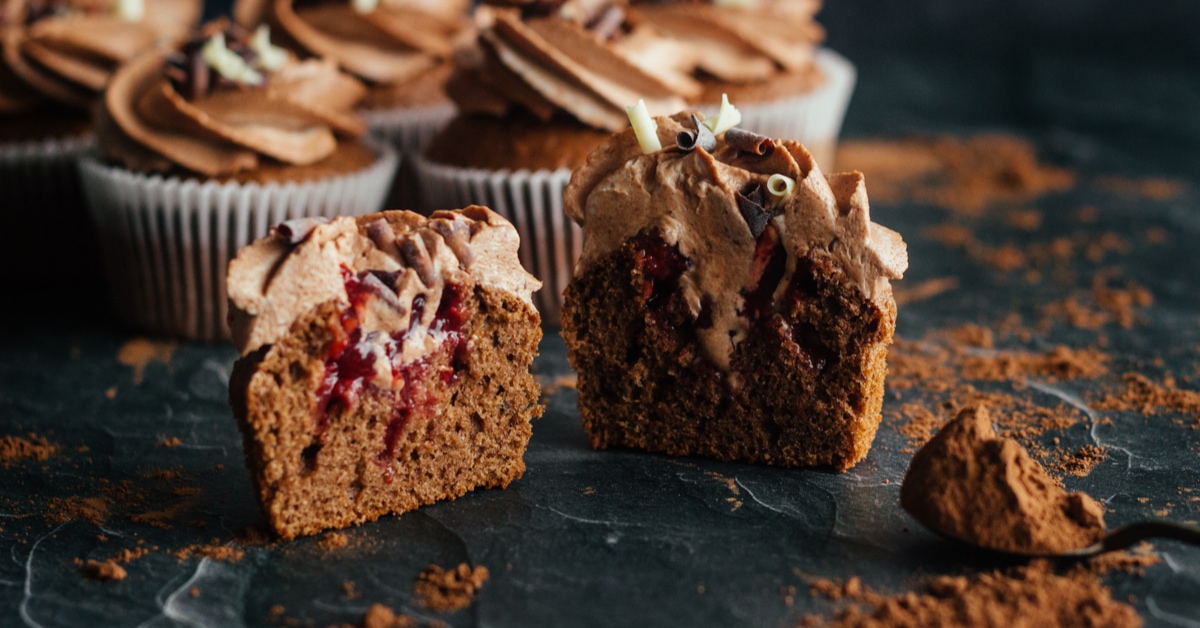 If you stumbled across this page by accident and are wondering what filled cupcakes are, well, they’re precisely what they sound like they would be.
They’re cupcakes filled with something else. I suppose you could also call them stuffed cupcakes or even cupcake surprises, which sounds more fun.
Want to save this recipe? Enter your email below and we’ll send the recipe straight to your inbox!

The surprise, of course, would be whatever tasty addition you weren’t expecting once you bit down into the confection.
The filled cupcakes on this list include all kinds of different things – everything from chocolate, caramel, and Nutella to mango curd and slime. (Yes! Slime! – Completely edible, of course.)
So whether you’re looking for a double dose of chocolatey goodness or something with a bit more tang, these 25 filled cupcake recipes should have something for you.

Cupcakes are sugary sweet and decadently rich most of the time, but I decided to start this list off on a zestier, tarter note with lemon raspberry-filled cupcakes.
The cakes have a bright burst of lemon flavor, and there’s a delightful tangy lemon and raspberry filling inside each one.
And because all cupcakes need at least a hint of sweetness, you’ll top each one with a fluffy white chocolate buttercream frosting that’s enough to make anyone drool.

If the tropical taste of coconut is more your thing, then you’ll love these coconut cream pie cupcakes.
They feature coconut in the cake, the filling, and the topping!
It’s a coconut triple threat! Plus, thanks to the coconut cream filling, they’re unbelievably moist, bordering on downright juicy.

Speaking of triple threats, now’s the perfect time to introduce one of the most decadent cupcakes on the list.
This soft, fluffy chocolate cupcake houses a scrumptious chocolate ganache filling inside and features a chocolate buttercream frosting on top.
If chocolate is your vice of choice, this is the cupcake for you.
Want to save this recipe? Enter your email below and we’ll send the recipe straight to your inbox!

If you’re allergic or averse to chocolate in any way, you’ll want to stay far, FAR away from this one.

You can whip up 15 of these simple, elegant white cupcakes and top them with delectable whipped buttercream frosting in less than an hour.
They’re pretty but plain, making it all the more exciting when someone bites into one and gets that first taste of the gooey strawberry filling.

Pinata cupcakes are another deceptively simple-looking cupcake (white cake with vanilla frosting) that houses a fun surprise inside.
You’ll hollow out each of the cupcakes and fill it with sprinkles and other tiny, edible decorations.
Just sit back and enjoy the look on people’s faces as they bite into them and see a veritable cascade of treats pouring out onto the plate.

It may look like these mango cupcakes are topped with sunny-side-up eggs, but I promise they aren’t.
They are, however, topped with delicious, slightly tangy mango buttercream.
The egg comparison is further reinforced when you bite into the cake, and a runny river of yellow goo pours out of it. (It’s mango curd, not eggs!)
These are fun, a little messy, and spectacularly yummy, and their unique appearance makes them a real treat for brunch.

These gorgeous cupcakes look like you just bought them from a swanky NYC bakery case, but really, you’ll whip them up in only an hour in your own kitchen.
They’re lovely and full of chocolate and Nutella goodness, from the Nutella filling to the soft, creamy Nutella frosting on top.
Top them off with crunchy Ferrero Rocher candies for an extra special, doubly nutty treat.

These Ghirardelli chocolate cupcakes are moist, pillowy soft, and delightfully rich.
You’ll top each one with vanilla buttercream and fill them with a creamy, sticky caramel sauce that’s so good, it will make you groan with pleasure.
The only thing they’re missing is a dash of sea salt to liven up the topping, but you can easily add that.

Peanut butter and chocolate go together so well that they’ve wholly outranked peanut butter and jelly in a lot of people’s minds.
These moist, tender cupcakes take full advantage of that fact.
You’ll start with a devilishly delicious dark chocolate cupcake base, and you’ll fill it with an almost overwhelmingly sweet peanut butter, butter, icing sugar, and milk filling.
Then, you’ll double down on the peanut butter and top each one with velvety smooth peanut butter frosting.
People won’t be able to get enough of these incredible desserts.

If you love the robust, warm flavor of coffee and cream, then these cupcakes are sure to blow your mind.
The ingredients list for them is a bit long, but they’re exceedingly easy to make, and if you love that comforting chocolate and coffee combination, these will be your new favorites.

These indulgent cookies and cream cupcakes have so much going on that it’s hard to know where to start!
There’s an Oreo at the bottom of each one, an Oreo sticking out of the top (if you want to add a little extra oomph), and the fantastically sweet and tasty frosting to enjoy.
But that’s not all!
Each cupcake also features a surprise filling made from marshmallow creme, butter, heavy cream, vanilla, salt, and powdered sugar.
Like I said, there’s a lot going on. But every bit of it is exciting and unforgettable.

These pumpkin cupcakes may not be as pretty and elaborately decorated as others on the list, but the tastiest things don’t need all that extra flair.
When you’re as delicious as these guys are, no one cares if you look nice or not!

Before you run screaming from what looks a bit like toxic waste cupcakes, don’t worry; these are simply dark chocolate cupcakes with a sweet, white chocolate pudding filling.
Of course, they look like something much more sinister, but that’s precisely what you want out of a spooky Halloween cupcake.
Plus, the kids will go nuts for the green “slime” filling.

These are some of the moistest, fluffiest, and most fantastic cupcakes you’ll ever try.
In theory, they’re just chocolate cupcakes, but the rich and tangy cream cheese filling inside each one turns them from ordinary to out-of-this-world extraordinary.
Honestly, these are so sweet and flavorful that you don’t even need to ice them, but cupcakes aren’t cupcakes without the frosting, so go ahead and ice them, anyway.

These jelly donut cupcakes are the best of both worlds, and they’re effortless to make.
All you’ll need is some cooking spray, a package each of yellow cake mix and instant French vanilla pudding mix, whole milk, eggs, vegetable oil, and seedless raspberry jam.
Cover each one in a light dusting of confectioner’s sugar, and you have an unbeatable treat on your hands.

These are more simple vanilla cupcakes with plain vanilla icing, although the cherry on top gives them a splash of color and elegance.
Of course, this is a list of filled cupcakes, so you know there’s more going on beneath the surface. In this case, the more is cherries — sweetly tart, red, and juicy cherries!
Yum yum yum!

These cupcakes are similar to the cherry-filled ones above, but instead of cherries, you’ll use frozen mixed berries blended with water, lemon juice, cornstarch, and sugar for the filling.
These are also vegan-friendly and gluten-free.

If you’re a huge fan of Key lime pie, then you’d love these even without the Key lime filling. There’s Key lime flavor in the cakes and the buttercream frosting.
In fact, the only place you won’t find Key lime zest in this recipe is in the graham cracker crumble, which is equally scrumptious in its own way.
The Key lime filling, though, adds even more tart zestiness and some extra cream and moisture for a wonderfully light and fluffy cupcake.

Everything about these Andes mint cupcakes is stunningly beautiful, from the deep black (chocolate) cake to the minty green frosting.
These could be on magazine covers, truly.
Even better than how they look, though, is how they taste, which is 110% divine.
The chocolate cupcakes are soft and tender, the chocolate mint filling is insanely good, and the mint buttercream frosting knocks it out of the park.
Stick an actual Andes mint on top of each one, and grab a couple before they’re all gone.

The moist creaminess of these cupcakes is right up there with the cheesecake-filled cupcakes I mentioned earlier.
They’ll practically melt in your mouth the moment they touch your tongue.
They’re also lightly sweet, milky, cinnamony, and perfect in every way.
The strawberry slices add color and a bright burst of berry flavor that makes them highly addictive treats.

These delicate, sophisticated cupcakes would fit right in at a traditional English garden party (but they’re ideal for less formal occasions, as well).
They’re sweet, aromatic, floral, and fruity, and you’ll love them down to the last bite.

These pretty-in-pink cupcakes combine some odd, less often used ingredients for a sweet, fresh-flavored cupcake that’s a refreshing change of pace from the artificial, overly sugared desserts we’re used to eating.
The rhubarb honey sauce has such a clean, naturally sweet flavor that will tickle your sweet tooth but not leave you feeling heavy and weighed down after eating it.
Oh, and the rhubarb buttercream? That stuff is phenomenal.

If you’re looking for a lovely dessert option that would look nice on your brunch table or the Christmas dessert tray, these cranberry vanilla cupcakes are just the thing.
They take just over an hour to make and combine homemade vanilla cupcakes with a sweet and tangy cranberry filling and decadent white chocolate frosting.
Add a few sugar-coated cranberries on top for a more pleasing aesthetic (and a tarter taste), and enjoy your time in the spotlight as everyone compliments you on such lovely treats.